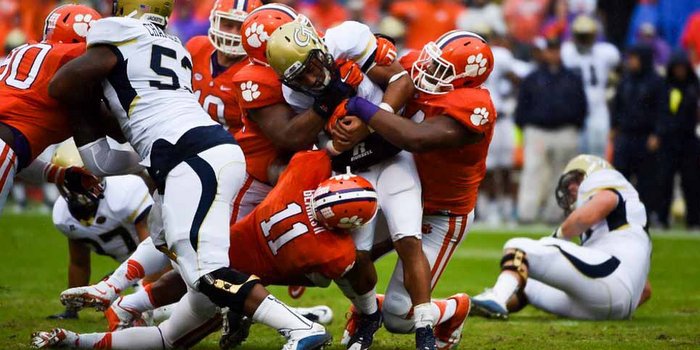 The arrival of the bees marks the beginning of Clemson’s championship drive.

No. 7 Clemson has had 10 days to stew on the loss at Syracuse, 10 days to lick their wounds, watch film and figure out just what the heck went wrong in New York.

Head coach Dabo Swinney gave a glimpse into the Tigers’ practices last week when he told the media that things had been “difficult” around the football operations center. Let’s be truthful here – things should have been difficult.

Let’s take one last look at the loss and then we’ll move forward. Syracuse isn’t a bad team, but they aren’t a really good team, either. I think they are exactly what their 4-4 record says they are, an average football team that caught lightning in a bottle on a miserable Friday night in the ACC’s worst football facility.

Syracuse played perhaps its best game under head coach Dino Babers while Clemson played maybe its worst game since the 2011 Orange Bowl debacle. And Syracuse still won by just three points. That’s the part that has to sting for everyone involved. Swinney is always talking about how five plays make the difference in each game, and it’s easy to go back and pick out five plays that meant the difference in a three-point loss and what could have been a win.

Swinney took the high road and congratulated the Orange, and during his postgame press conference, he mentioned that the night was all about Syracuse and what they accomplished.

That’s great if you are a Syracuse fan, but if you’re a Clemson fan that doesn’t quite explain how the Tigers were out-played by an inferior opponent. That’s the part the players and coaches have had to mull over for 10 days while still throwing compliments toward Babers and his squad.

Hopefully, Clemson is able to fix the problems that plagued the Tigers in the loss. The defensive backs were an issue. The kicking game was an issue. The play at quarterback was an issue. And yes, the playcalling was an issue. Tony Elliott and Jeff Scott probably wish they had stuck with the run a little more, especially with a gimpy quarterback in the first half and a freshman in the second half, and Brent Venables probably wishes he would have stayed in a base defense more instead of play calls coming in so late. Those have to be fixed if Clemson is to make another run at the College Football Playoff.

We will find out the state of the 2017 team Saturday night at 8 p.m. in Death Valley. The Georgia Tech Yellow Jackets come calling, and Paul Johnson has his team playing fairly well. They’ve lost two games, both by a single point, and probably feel like they are one or two plays away from being undefeated.

Death Valley at night is electric, and after a rough start to the season that included three games against ranked teams, two of those away, and all night games on the road, the Tigers get the chance to once again play in front of a sold-out crowd.

Before kickoff, however, we will find out if Kelly Bryant is able to go. One thing is sure – head injuries and ankle injuries aren’t easy to get over. In fact, like a hamstring or a turf toe, once you get the injury it really takes an offseason to recover. That means Bryant is likely to get dinged again at some point, especially considering his run game is a big part of the offense.

That means a clear line of succession has to be in place. I’m not a coach, and I haven’t won any championships. I’m just a guy with an opinion, but it seems to me that smart play would be to pick one of the two guys (Zerrick Cooper or Hunter Johnson) and make sure that player gets a heavy workload in practice in the coming weeks. This isn’t a .500 team wondering if they’ll make a bowl game, and this isn’t a team building for the future while letting this season slide. This team has the talent to win it all, and sometimes hard decisions have to be made. You can bet Swinney and his staff know that.

Something has to be decided at kicker as well. I’ve seen Alex Spence in practice, and I can say with 100 percent certainty he has the talent and the ability to be a major part of the offense. He is learning on the job, however, and a team that wants to make a playoff push can’t afford to keep missing scoring chances while he learns.

It’s an exciting week – a night game in the Valley beckons and two more ACC games follow that will decide whether the Tigers play for another ACC Championship.

A lot of questions will be answered this week. Hopefully, the answers are the ones we want to hear.