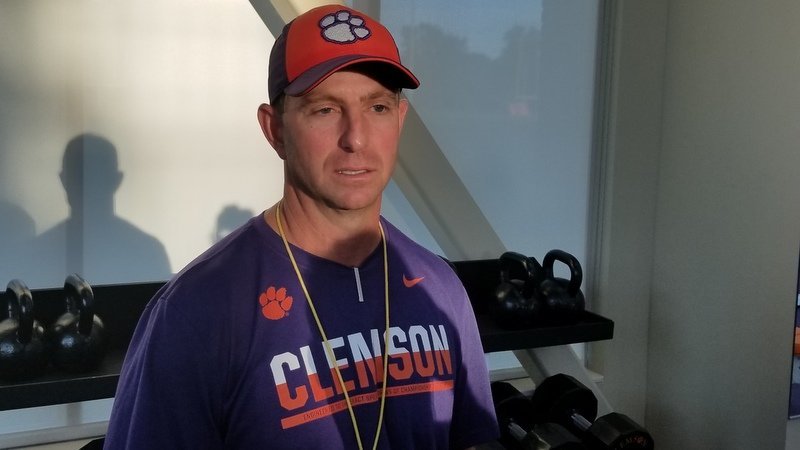 CLEMSON – Clemson’s quarterback rotation added another member this week with the addition of punter Will Spiers.

Wide receiver Hunter Renfrow is already in the quarterback rotation – he might be third string for Saturday’s game at Wake Forest – and head coach Dabo Swinney told the media Wednesday that both Ben Batson and punter Will Spiers are getting looks.

“He (Batson) is one of those in a really good spot. He's had since last Wednesday to think about it and refocus and be in the meetings and now he has from the very beginning of the week and he's had all the reps and he's more engaged,” Swinney said. “We are in a better place. I am not afraid to play Ben. He is a functional quarterback. I've even taken Will Spiers, he was a really good quarterback in high school and throws the ball better than many of them out there. He can flat out rip it.

“He is a guy I will probably leave there. He doesn't have anything better to do other than play Fortnite, anyway. Those punters and kickers don't do anything. It will give him something to do with his time other than going down there and playing ping-pong. He could be a real functional guy for us as a backup. He has a couple of years left.”

“Mark is back. He had some team discipline for a game and he's had a good week of practice and he's responded well,” Swinney said. “I didn't have to sit him or anything, but sometimes that is the only way you can get some of these guys' attention. You can run him, but he can run all day. I think he has responded well. Cornell, it looks like he will be out again this week. He is still kind of day-to-day.”

“Great. He has looked great. I think he is one of those guys that had maybe his best practice today. Last week there was a lot going on. There was a lot of stuff to manage but he's had a really good spot.”

“What a difference a week makes. This was actually one of our better Wednesdays,” he said. “I was just telling the team that it was a really good practice, a lot of good focus. I thought the guys had really good energy and were locked in. We had a few guys that I’d probably say it was their best practice. It was just good. It was fun to see them locked in and dialed in and to see them getting excited to play, getting the plan down. It was a really good day.

“I think the open date comes at a really good time for us. I think they always look forward to the open date whether it’s early or late. It actually worked out good for us because we went two-and-a-half weeks straight - 19 days - and then we gave them that one weekend off, which was big and then we’ve been going for eight or nine weeks straight that these guys have been grinding. I think it sets up really good for us. The biggest thing is we’re healthy. Last year, going into the open date, we weren’t 100-percent healthy. We’re in a better place mentally and physically, so hopefully, we’ll be able to play well. That’s all I want to see us do. We’ve got a big challenge with this bunch, especially up there at their place.”

Swinney said that injured players Tremayne Anchrum, Trayvon Mullen and others should be ready to go at Wake.