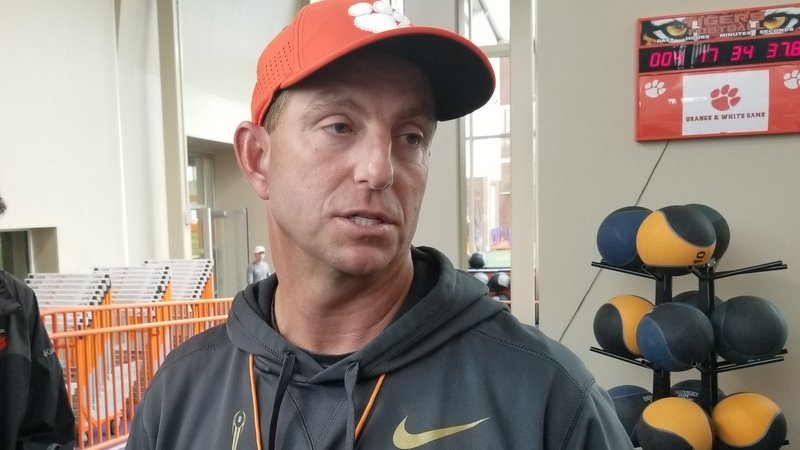 Swinney speaks to the media Monday

CLEMSON – Clemson head coach Dabo Swinney is in a good mood heading into the final two practices of the spring.

The Tigers practiced for two hours Monday – including a half-scrimmage – and will practice again Wednesday in shorts. The spring game will be held Saturday at 2:30 p.m. at Memorial Stadium.

How good was his mood? I asked him, “How is your health heading into the spring game” (meaning the football team) and he went on for 30 seconds or more describing how he feels. He then laughed and said, “Oh, you mean the football team!”

*Swinney said Monday’s practice was the best of the spring. Several players were held out, including Tanner Muse, Adam Choice and J.D. Davis. Shaq Smith was back at practice after missing Friday.

“This was probably our best day overall. We actually did a lot of 2's-on-1's. I don’t like for them think of themselves as twos,” Swinney said. “I just want them to be all Clemson players. I thought today was one of the most competitive days we’ve had and we mixed it up a lot. We worked on all of the situations that we still needed to touch on. It was the fewest reps scrimmage wise but still was somewhere in the 50-play range.

“The team is in a good spot. We got a few guys that are banged up. These next couple of days will be big. We held Adam Choice out today and Tanner Muse. Shaq Smith missed Friday but was back today. We’ve got a few guys that we held today that I hope will be ready for the game on Saturday.”

Swinney speaks to the media Monday "

*Tight end Braden Galloway might see some action in the spring game. Swinney said they might have to call out plays to him (Swinney mimicked shouting and said, “Run a curl!”). He said he is excited to see what Galloway will do in August camp.

*Running back Tavien Feaster had his best day Friday, continuing a trend we’ve heard all spring about his emergence. Swinney said Travis Etienne has impressed this spring, but pointed to the weight room and said, “That is where Travis will improve the most this summer. In there. That will be his laboratory.”

*Swinney might have taken a subtle jab at South Carolina when he implored the fans to show up for Saturday’s spring game, saying, "Because when you don't, it puts it all over the internet that you didn't show up."

He said is looking for a large crowd.

“I really hope there is a great crowd, because the bigger the crowd the more we can simulate what the atmosphere will be like in the fall. We don’t have any exhibition games like the NFL, so this is the best we can do to prepare.”

The quarterbacks will not be live Saturday (they can’t be hit or tackled), and each team will have two quarterbacks. It will be interesting to see which quarterbacks are paired – my early guess might be Kelly Bryant and Chase Brice on one team with Hunter Johnson and Trevor Lawrence on the other.

*The All-In Ball is Friday night, and Swinney said the first one raised somewhere around $90,000. Now they're raising millions, and he said he considers it his responsibility to give back to the community.

*K’Von Wallace said last year’s loss to Alabama still stings, and this team is ready to prove that was a fluke.

"Most definitely. We're a hungry team and we're coming ready like dogs, lions,” Wallace said. "I feel like we're the best defense in the country, hands down. We've got a lot of amazing players back and I feel like we're going to be in the top categories on defense and just only getting better and it's a scary sight to see.”