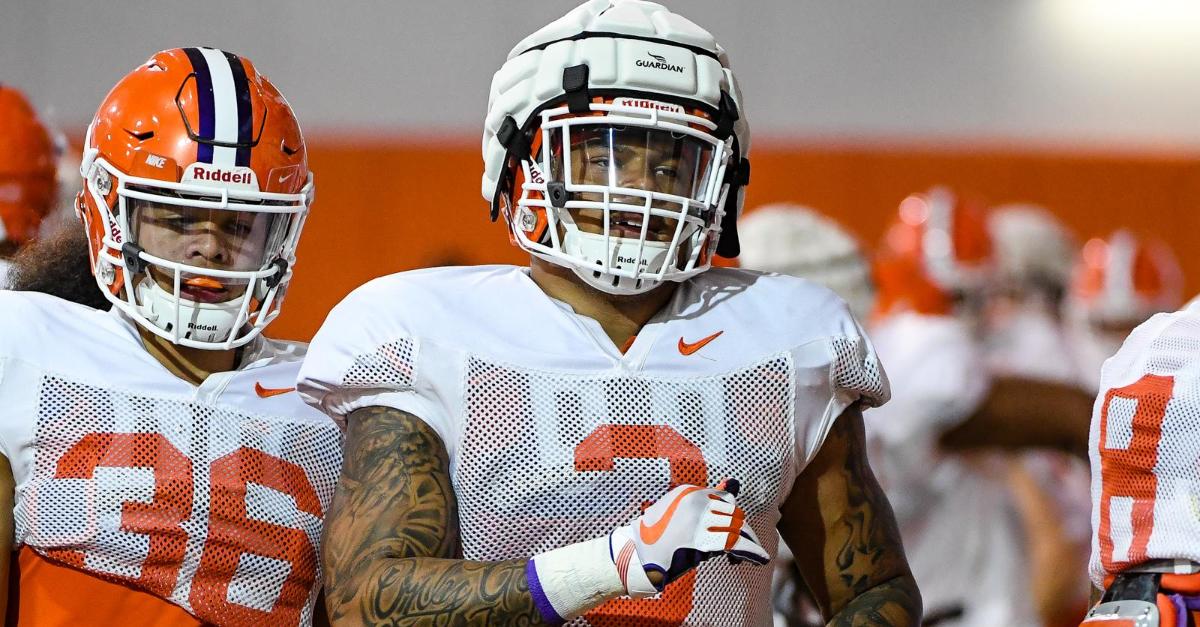 Xavier Thomas runs through a drill at Monday's practice

CLEMSON – Clemson’s defense is undergoing a youth movement up front, but head coach Dabo Swinney says that group has a different look than the one he saw in the spring.

The Tigers held the third practice of fall camp Monday afternoon, and Swinney said he’s loved what he’s seen out of his team through three days.

“This was the first day in pads for us, so it was an exciting day. We've kind of been building to it. Shells, shoulder pads only, and we've only got one more day in shoulder pads,” Swinney said. “We have kind of got this acclimatization period leading into full pads on Wednesday. I am super, super encouraged by what I've seen so far in these first few days. The energy, the tempo, the leadership, and just an enthusiasm out there.

“Guys have been about their business. There have been some very clean practices, just from the little things that I am always looking at when I am evaluating how the practices are going. The effort and energy and commitment to do the little things the way we want them done has been really good. We're off to a good start and we have a lot to do. We have a plan of how we are going to get them ready, but we are a little ahead, to be honest with you.”

Swinney is especially encouraged by the defensive line.

“That has probably been my biggest encouragement to this point is defensively, they just look so different than they did in the spring,” he said. “Those first three days of spring practice, it was like wow, we have a lot of work to do. We look totally different. I am so proud and impressed of the leadership on the defense. (James) Skalski and KJ (Henry) and (Tanner) Muse and (Justin) Foster and Isaiah (Simmons) and those guys.

“Those guys have worked their tails off this offseason from a mental standpoint. Up front, we are young. Across the board, we look so much more like a knowledgeable defense. I am very encouraged by the work they put in when nobody is watching. That group has transformed, physically and mentally since the last time I saw them on the field.”

“He’s one of those guys who is much improved from the spring. He was spinning, lost. He’s worked really hard. We’re just getting the pads on and we’ve got a lot to do from an installation standpoint, a lot to do from a situational standpoint. We’ve got a long way to go in our progression but we’ll see how he holds up. He’s a guy we’re definitely going to need to help us. We’ll see if he hits the wall but right now after a few days, he’s hanging in there and is much, much improved. It’s just a matter of time that he’s going to be a very good player. He was just overwhelmed with everything this spring but it’s settled down for him a lot.

“Just anytime. Just waiting on Danny (trainer Danny Poole). They’re progressing him. I guess they’re starting to do some of the cutting and stuff. It’s just a matter of him feeling like he can cut loose on it and plant and cut like he needs to. I don’t really know. Hopefully, sooner than later. It happened a couple of weeks ago. It looks a lot better. It was pretty black and blue. It looks a lot better.”

“Two good prospects. I’m really pleased with both of them. Tony (Elliott) did an awesome job. Tony is a very stingy recruiter, I like to say. He doesn’t offer many guys and there are a lot of boxes you have to check. I think he did an awesome job going through the process and identifying the right candidates. We landed those two. They’re both big stout guys. Mikey doesn’t get the credit he deserves. He’s a put-together guy. He’s not a puny kid. I think a lot of people knew Chez was a bigger back coming in as a freshman but Mikey is put together. He’s stout. They’ll be fun to watch develop. They’re both doing a nice job. We’ve got to get them ready.”

“We’re not ready to pencil any of those guys in. We’ve got a long way to go, especially at that position. First day in shoulder pads, we need to get some live work and scrimmaging. We need to get another week of installation and see how some of these guys are processing it and who can keep moving forward and who hits a wall and gets overloaded. That’s going to happen with somebody, it’s just the way it.

“If you put pictures in dictionary and looked up linebacker, I’d want his picture in there. He looks exactly the way you want them to look. He is put together. For a freshman coming in here, he is as impressive, physically ready guy as you’ll see.”