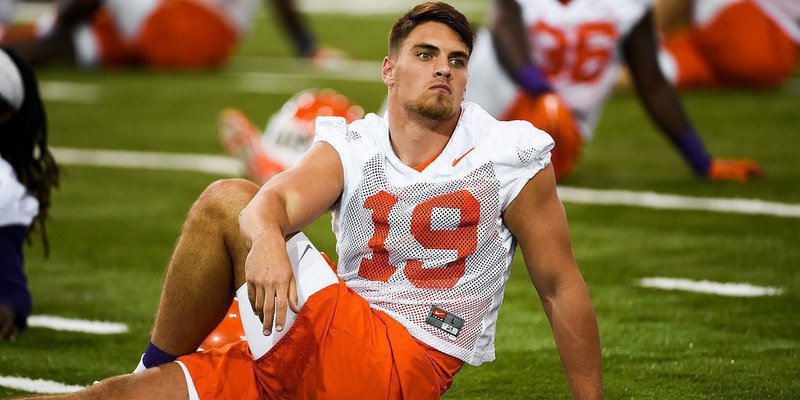 CLEMSON – Tanner Muse didn’t play a lot last season, but when he was on the field he made plays. With a bigger role this season, he hopes to make even more of an impact.

The sophomore safety out of Belmont, North Carolina, shared Special Teams Defensive Player of the Year honors with Chad Smith last season, and he wound up with 24 tackles in 106 snaps over 15 games. Muse had the long interception return for a touchdown against Syracuse late in the season, blocked a punt against Alabama in the National Championship game and saw meaningful snaps against the Tide late.

Muse is battling for a starting spot this season, but he isn’t stressing over the competition.

“Right now it's just a lot of competition. We have a lot of fun,” Muse told TigerNet earlier this week. “A lot of guys are having fun competing against each other, and knowing they have your back and you're helping each other.”

Muse is thankful for his experience on special teams last season.

Getting on the field means being a complete player, and Muse said he’s working with safeties coach Mickey Conn on being more flexible.

“My footwork and opening my hips up more, being more flexible are the big things,” he said. “One of the downfalls of my game is being a little bigger and not being able to move my hips on one on ones and coverage type things - transitional movement.”

Conn was a defensive analyst last season but took over the safeties in January when Mike Reed was moved to corners. That allows the younger players like Muse and Isaiah Simmons more time with a coach.

“It's a lot different being able to have that 1-on-1 because when the head coach radios with the corners, he's trying to watch the whole back four instead of just the back two - the free safety and the strong safety,” Muse said. “It's a lot more hands on, so you get quicker instruction.”

Muse has already earned a reputation as a big hitter, and he admitted that he likes contact. He’s also learning how to be better in run support.

“I like coming down in the box a lot. I played a lot of linebacker in high school, so I'm used to it and I've just got a better feel for it,” he said. “I'm better at it, so I enjoy it more.”

Muse spent much of the offseason watching his film from last season, and he had a scouting report on Muse the freshman.

“He ain't good, really,” he said of his self-scouting report. “But, looking back I knew I had to take those steps to continue to get better. I have enjoyed watching it.”