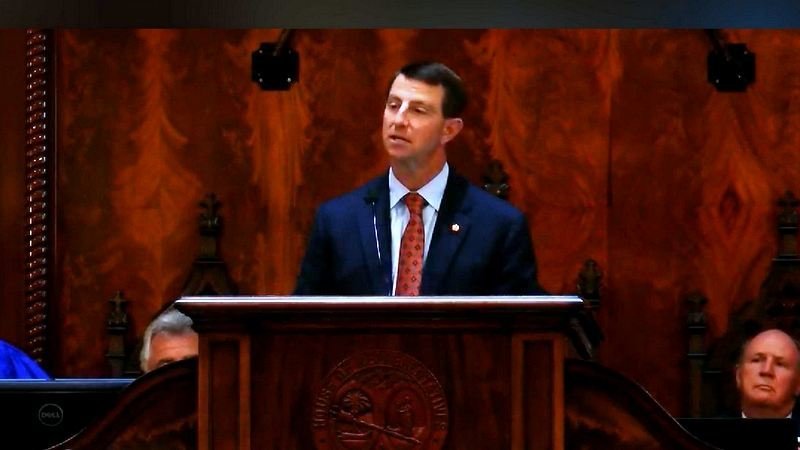 COLUMBIA – Many people have said that Clemson head coach Dabo Swinney should run for office someday, and he proved them right by giving a campaign-type speech to the South Carolina legislature Tuesday.

The Clemson University football team was honored at the South Carolina State House Tuesday for winning the 2018 National Championship. Swinney addressed a joint assembly of the South Carolina Legislature, and he told the assembly that he understands football’s role within the framework of the university.

“I always tell people, we're not the house. I'll tell my players that all the time, too,” Swinney said. “We're not the house. Clemson University is the house, and we are kind of the front porch. We're the front yard and curb appeal matters. If you know anything about real estate, if it doesn’t look good on the front porch and have curb appeal a lot of times, they ain't going to stop. And so, I do realize the importance of Clemson football to Clemson University, and we take great pride in trying to perform our role and hopefully build our brand and where people want to come to this state and people want to come to check out Clemson.”

As he has mentioned before, the fun is in the winning.

“I tell that to our players all the time because the fun is in the winning,” Swinney said. “But to me, the most important thing is how you win. I think that's really the legacy that matters more than anything. Yes, it's fun to win, but I think how you win is what matters. And yes, this team went 15-0 on the field and is the first team in the history of modern day football to do that. And not only did they do it, man, but they also did it in an unbelievably dominant fashion. They won 13 out of 15 games by 20-plus, including beating Alabama by four touchdowns. I don’t know when that’s happened.”

Swinney then told the legislators that winning in football takes commitment and sacrifice, and said it takes the same things in government.

“This group of young men was a team in every sense of the word. They loved each other, and every day they were committed to the singleness of purpose of making the 2018 Clemson Tigers the best they can possibly be,” Swinney said. “So yes, football unifies and yes, football is a game, but it is one that provides us a roadmap of the things that we can all accomplish. When we believe, when we love and when we sacrifice in the pursuit of common goals. Football unifies, and we hope we showed that to the state of South Carolina and the world on that January night in northern California. And specifically, I hope we show that to this group in this room. The same things that won big for us will win big for this state and the people in this room. It’s called team, and one of the ingredients of team is sacrifice. Gotta be willing to sacrifice for the betterment of the team. Together, everyone accomplishes more. Its common purpose. It's having a common purpose. Our football team had a common purpose.

“I think to be great at something, you should be called to do it. And you know, I know I was called the coach, and I'm passionate about that. And you should be called, not just elected. You should be called and passionate about the common purpose. Through that common purpose, you find common ground. Our team had a belief in a positive outcome. Even in the Bible, it says iron sharpens iron. One man sharpens another. And listen, you ever seen iron sharpen iron and see the sparks that fly from time to time? That's okay. So just like in my team room, being here in this room, there are many different people in this room, different races, different religions, different political beliefs, different backgrounds, different communities. But I would just say to you today; we're all on the same team. We're all South Carolinians. You're all on the same team. You're not competing. When teams compete against each other, it's hard to be successful.”