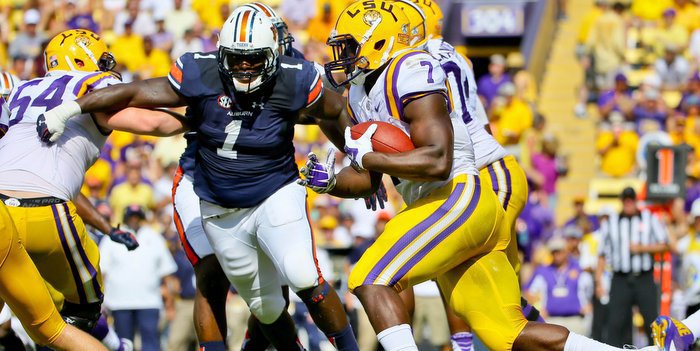 We learned early Tuesday morning that Clemson’s season-opening game at Auburn will kick off at 9 p.m., adding a little more luster to a game that already has fans and players excited.

You can bet that Montravius Adams has the time marked down on his smartphone.

ESPN announced early Tuesday that the matchup between the two Tigers will sit in one of it’s primetime slots on September 3rd, kicking off at 8 p.m. local time to Auburn but 9 p.m. EST. The game will mark the Golden Anniversary of Clemson/Auburn football – it’s the 50th time the two programs will square off. Auburn leads the series 34-13-2, but Clemson has one each of the last games, knocking off Auburn 38-24 in Death Valley in 2011 and beating Auburn 26-19 in the Chick-fil-A Kickoff Game in Atlanta in the season opener in 2012.

There will be storylines galore for the game. Former Clemson defensive coordinator Kevin Steele is now the defensive coordinator at Auburn after stops at Alabama and LSU. Steele coached at Clemson from 2009-11 but was let go after the debacle in the Orange Bowl against West Virginia. The teams have played three times since 2010, including the game at Auburn in 2010 when Clemson’s coaching headsets went out in the decisive third quarter. And Auburn’s roster is dotted with players that Clemson recruited heavily, including defensive end Carl Lawson, linebacker Jeff Holland and defensive end Byron Cowart.

That list should also include Adams, who was considered by many to be a Clemson lean during much of the recruiting process with Georgia making a late push. However, Adams chose Auburn on National Signing Day in 2013. I was told late in the process that Adams had a mentor who helped steer him towards Auburn, despite the fact that Adams said he loved Clemson – his first offer – and the iconic hill.

"One thing I love is the hill. There's just something about it I love," Adams said late in the process.

Early during Auburn’s spring practice, however, Adams was asked about Auburn’s 31-10 victory over Memphis in the Birmingham Bowl and if the victory gave the Tigers confidence heading into the new season.

“I think that was real big, so we could take momentum into this season,” Adams said, before telling anyone that would listen that Clemson is still – and already – on his mind.

“Ya’ll know we got a big game coming up against Clemson,” Adams said. “It’s a little while from now, but it goes by fast. We needed that momentum because they’re a pretty good team. I just think if we keep practicing how we’re doing and go into spring and go into fall, I think we can do what we got to do.”

Clemson should be more than “pretty good” heading into the 2016 season, and Adams and his defensive teammates will have their hands full dealing with All-American quarterback Deshaun Watson, running back Wayne Gallman, tight end Jordan Leggett, and wide receivers Deon Cain, Artavis Scott and Mike Williams. Adams will also have the task of facing off against Clemson center Jay Guillermo, who improved his game several levels last season.

Is Adams saying Auburn will upset Clemson – already an early 9-point favorite- when he says “I think we can do what we got to do?” It’s too early for smack talk, but it does add another layer of intrigue to what will already be a hyped season opener.