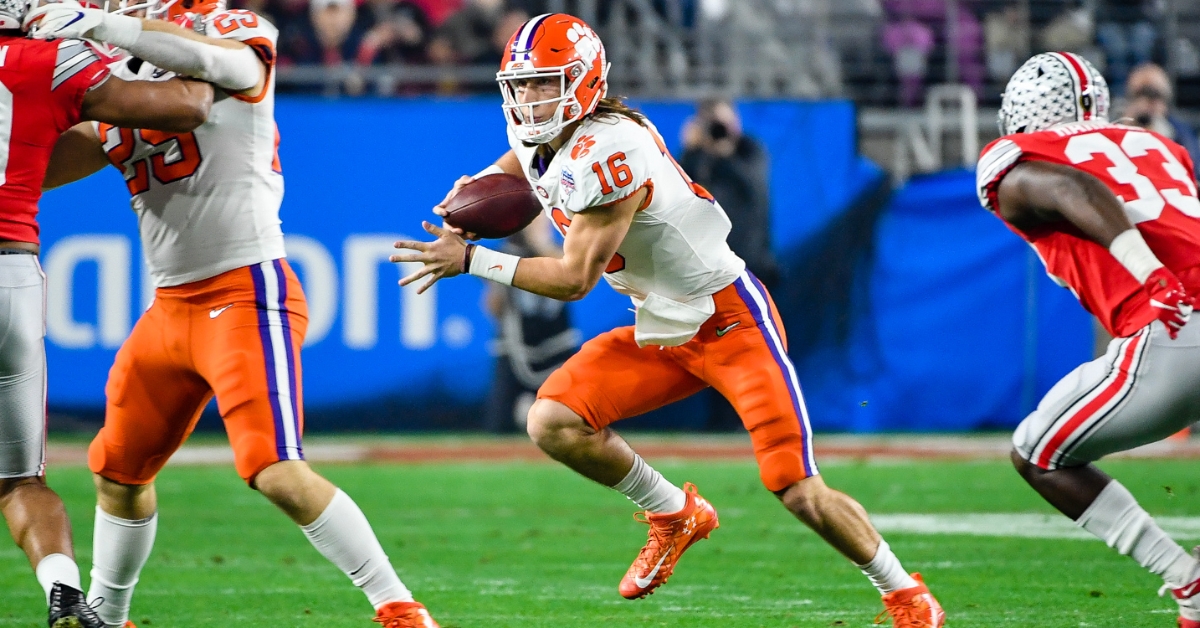 Lawrence ran for a career-high 107 yards against the Buckeyes.

Trevor Lawrence is coveted by NFL teams because of his ability to throw the football, and his arm strength is one of his best assets and will be on full display when No. 3 Clemson takes on No. 1 LSU in the National Championship a week from Monday.

LSU knows all about Lawrence and his stable of receivers, but the Bayou Bengal defenders also respect his running ability. Lawrence broke off a 67-yard run against Ohio State in the College Football Playoff Semifinal and led Clemson with 107 yards on the ground in the win over the Buckeyes.

"First of all, I was watching the game, the Ohio State game some, and saw him run the ball for a 67-yard touchdown, he looked pretty fast, so he's definitely a great all-around player," LSU safety Grant Delpit told the media this week. “People don't give him credit for his running ability. So we're definitely going to take that into consideration."

LSU linebacker K'Lavon Chaisson said he has to be aware of Lawrence’s running ability – but doesn’t feel like Lawrence presents the same challenge as Oklahoma’s Jalen Hurts.

"It doesn't really slow anything down for us. Same gameplan as last week.....I don't feel like we're gonna see a better running quarterback than Jalen Hurts. It's just something you always keep in mind, while either rushing the quarterback or you're playing in a zone read, that he can pull the ball. I trust my athleticism that I won't be outrun by him but at the end of the day, he has deceptive speed. I've watched him play and he's a great athlete. It's just something we've gotta always be aware of." 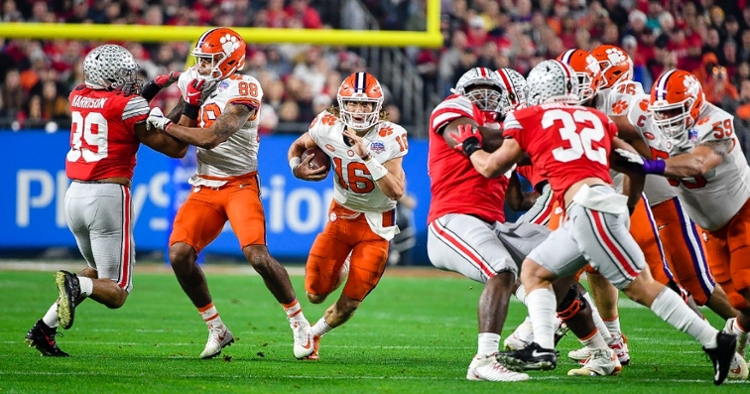 Lawrence ran for a career-high 107 yards against the Buckeyes."

In other words, LSU can’t take it for granted that Lawrence will think pass-first.

"It just stresses how important this game is gonna be about always keeping that in mind that this quarterback can pull the ball and make explosive plays off of it and don't take it for granted," Chaisson said.

Lawrence ran the ball 93 times for 514 yards this season but tallied career-highs against Ohio State in the 107 yards and with his 16 carries. His previous high in carries was 11 against UNC in late September. His only other double-digit carry game came against Louisville (10) in October.

"I look at this past game, they used him as much as they have all year as a runner. And I think they caught Ohio State off-guard and they kinda blindsided them in a way,” Lawrence said. "He can throw the ball and also he can get out and run in space; which was pretty interesting to see how fast he was. Breakaway speed.