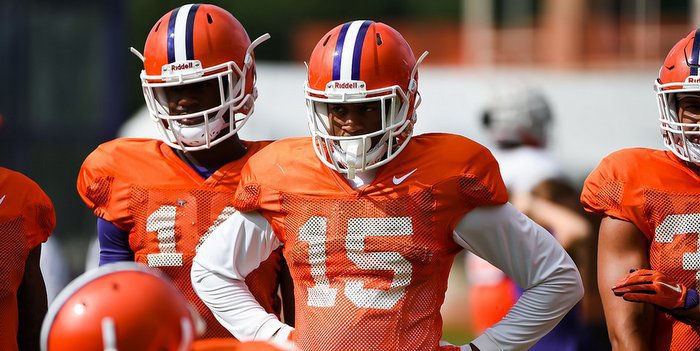 Wiggins has been playing nickel and both safety spots in camp

CLEMSON – Korrin Wiggins is a year removed from tearing his ACL, and the rehab process has been long and grueling. What it hasn’t been is lonely.

The redshirt junior defensive back out of Durham (NC) Hillside tore his ACL on August 12th last year and missed all of last season with a medical redshirt. A starter as a nickel back in 2014, he has 54 tackles, four tackles for loss, four interceptions for 63 yards, four quarterback pressures and seven pass breakups in 813 snaps over 25 games (six starts) in his career.

Wiggins would likely have started last season, but the injury derailed those plans and he watched Clemson’s magical run from afar. But he didn’t have far to go to find someone who understood what he was going through. In turn, he was able to help out corner Adrian Baker when he suffered the same injury in the spring.

“Travis Blanks, Charone Peake, Deshaun (Watson) have been there, so they put their arms around me,” Wiggins said Wednesday. “As a matter of fact, Terry Allen, our GA, he tore his twice, so I reached out to him and they would tell me that's it's all going to be alright.

“When Adrian tore his, I was there for encouragement and told him to look at me - a lot of us have been through it. It's not the end of the world. I've been there, so I would tell him the types of things I felt, but our bodies are different, but I've just tried to be there to encourage him. He's (Baker) been running the stadium today. He's doing very well and is coming along. He's taking his time and listening to his body.”

Wiggins had two sacks during Wednesday’s stadium scrimmage, and he said it shows he feels like he’s getting back to normal.

“Maybe six months into it, I got back feeling very confident in it. I'm big in my faith and I trust in the Lord, so I just went with it,” he said. “As a matter of fact, August 12th, is the day I tore my ACL, so in two days it will be a year. I had my surgery on the 28th, so August 28th will be a year. I trust my rehab and the Lord and I listen to my body. I just cut it loose. It wasn't too hard, but there are growing pains within it. I feel like I'm ready to go. This summer I did all of the conditioning work and all of the drills. It feels great. God is good, all the glory to him. I'm just working every day, learning and continuing to improve.”

The hurdles he faces are more mental than physical.

“Mentally - just knowing that you're healed. Knowing that it's back to normal and you can be back or be better than you were,” Wiggins said. “Some days, it swells up and you want to ice it more. You can't do as much with your range of motion when it swells. Some days it hurts more than others. The days it hurts more, you might want to do a little less.”

Wiggins will likely wear a knee brace this season, and the brace is something he’s still getting used to.

“At first it was hard to get used to,” he said. “Us skills guys really don't like braces, but now I don't even pay it any attention because I've gotten used to it. I play fast and physical. I listen to the trainers. I feel like I don't need it, but it's more precautionary, so whatever they want, I'll do it.”

He told the media that he’s been working at nickel, strong safety and free safety as defensive coordinator Brent Venables tries to find the best fit.

“I work at everything. I go in wherever they want me to go in. I'm just going in there strong, continuing to learn, so I can be that versatile guy,” Wiggins said. “It doesn't matter, whatever the team needs. I'm a team guy, so wherever they want me, I'll go there. definitely stayed invested. I studied a lot and put a lot of work in. I’m always on the go and in the flow of things. My versatility is a bonus for the team. I take great pride in that and want to make sure that I stay versatile. By staying versatile, you learn, so you can make sure you know what you're doing.”

In addition to working his way back into playing shape, Wiggins is taking on the role of mentor to a young secondary.

“I mean, we're kind of up and down. We've got some youth, but it's been very good. Growing pains throughout the way, but we don't play today, so we're going to continue to get better,” he said. “All those young guys are doing very well, they are playing with confidence and that's big coming in.

“I've always been in that leadership role, especially with the young guys as they watch film. I'm there to answer questions and help them learn from what I know. I'm one of the older guys on the defense, me and Cordrea Tankersley have the most snaps in our secondary. So, I just go with it.”