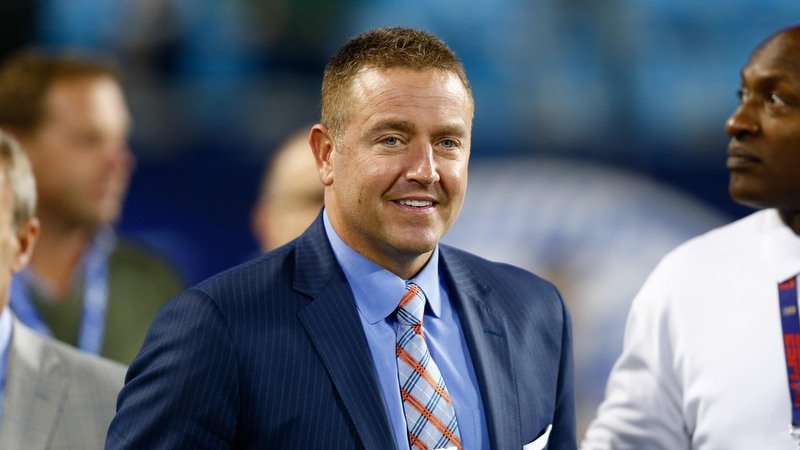 Herbstreit says Alabama will have to run a tempo offense (Photo by Jeremy Brevard, USAT)

Kirk Herbstreit has seen Clemson play a number of times this season, including last weekend’s 38-3 demolition of Miami in the ACC Championship Game. As a result, he knows exactly how he would attack Clemson if he coached for Alabama.

Top-ranked Clemson takes on No. 4 Alabama in the Allstate Sugar Bowl on New Year’s Day in the Mercedes-Benz Superdome. This will be the third consecutive year that Clemson will face Alabama in the postseason. Alabama defeated Clemson 45-40 in the National Championship at the end of the 2015 season in Phoenix, Arizona, while the Tigers won last year 35-31 in Tampa, Fla.

In the national championship game last January, Clemson’s up-tempo offense tired out the Alabama defense and the Tigers marched down the field on a game-winning drive that ended with a throw from Deshaun Watson to Hunter Renfrow with one second remaining.

Herbstreit said it would be Alabama that needs tempo this time around.

“Tempo will be a big part of it. One of the things with college football, you can go tempo, and try to wear down a defensive front,” Herbstreit said at the College Football Hall of Fame Awards ceremony Wednesday. “A lot of those guys are 290 pounds or 300 pounds so a lot of times you’ll see that approach. I think Jalen Hurts is going to have to be involved in not just running the football, but I think he’s going to have to make some big plays throwing.”

Herbstreit said that while Clemson’s defensive line gets a lot of the credit, people shouldn’t forget that the Tigers are stacked at linebacker and in the secondary.

Herbstreit says Alabama will have to run a tempo offense (Photo by Jeremy Brevard, USAT)"

“Clemson sometimes — I’ve been around their team a lot — people talk about their defensive line as if, I don’t know, their secondary and their linebackers are really good too,” Herbstreit said. “I think it’s an overall defense that’s very challenging. The cool thing is Hurts has experience playing against them, although it’s a new scheme.

“A receiver besides Calvin Ridley is going to have to step up. If you know (Clemson defensive coordinator) Brent Venables at all, he’s going to come up with a plan to try to take away Ridley, and I want to see who that other guy can be for Alabama.”

Alabama has outscored Clemson by a lone point – 76 to 75 – in the two games – but the Tigers have gained 1,061 total yards of offense against Nick Saban’s defense. However, they did with Watson at the helm, not current quarterback Kelly Bryant.

“Their offense has changed not just because of Deshaun, but because of the skill set and the strengths of Kelly Bryant,” Herbstreit said. “They become a team that can now run the ball with the quarterback, where it’s not just part of the offense, it’s a big part of it.

“I think if they’re going to be able to continue to win these next two, I think Kelly Bryant being able to throw the ball down the field to Deon Cain and some of those other receivers is going to be a big ingredient. If I’m Nick Saban, I’m putting guys at the line of scrimmage. I’m determined to stop that running game, and I’m willing to take my chances with Kelly Bryant throwing the ball. Receivers are going to have to win one-on-ones, and Kelly Bryant is going to have to throw the ball accurately.”