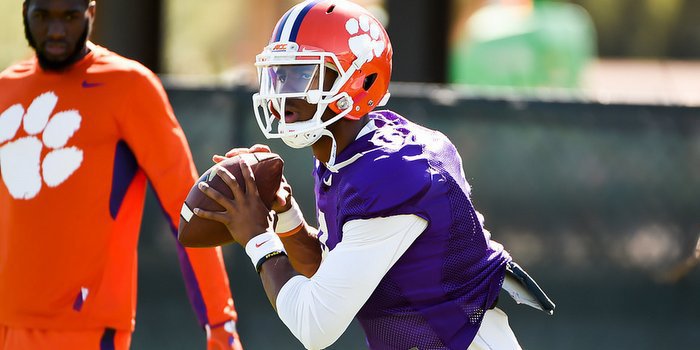 Bryant has had a solid spring

CLEMSON – Kelly Bryant experienced the highs and lows of being a college quarterback in 2015, but as he looks back on his freshman season at Clemson he realizes he’ll be better for it.

The Piedmont (SC) native avoided a redshirt and became Deshaun Watson’s primary backup all while trying to perfect his craft and learn a new offense in 2015. His high point came in the Tigers’ dominating win at Miami in October – Bryant had a 59-yard touchdown run in his most extended playing time of the season.

His low point came three weeks later at Syracuse – an early fumble stripped Clemson of momentum – and the highs and the lows became part of the learning process.

“I think the Miami game was really a turning point in the season coming in and being able to put some points up on the board and making my first appearance with some real playing time,” Bryant told TigerNet Monday night. “It was a neat experience. Following that was the Syracuse game, and I went down and fumbled. It was more my fault with ball security. Having the coaches trust me and putting the package in, and then I go out and do that, but it was just something I had to learn from. I just had to move ahead, put it past me and learn from my mistakes.”

Bryant earned praise from head coach Dabo Swinney after last week’s scrimmage for making plays with his legs, but Bryant wants to be a complete player and not just another running quarterback.

“I'm pretty confident in my legs. Something I've always tried to get better at is my arm and being more decisive with my decisions out of the pocket,” he said. “I'm trying to hang in the pocket a little bit longer rather than instinctively just trying to run. I'm trying to find those holes in the defense and get the ball to the guys in space.”

Bryant is in a battle with veteran Nick Schuessler for the right to back up starter Deshaun Watson, and he said his goal is simple. Be ready to play.

“Make sure that Kelly is ready because you never know when something is going to happen, so I have to make sure that I'm always ready with the game plan,” he said. “I feel confident with the coaches and how they're coaching us each day out here in practice that they're pretty much putting us in the game even if we are on the sidelines getting mental reps. I do feel confident.”

Bryant has built a solid relationship with quarterbacks coach Brandon Streeter, and he said Streeter tells him to just relax and play the game he loves.

“Just be decisive. Relax and have fun. It's like I said earlier, one thing I've been doing is thinking too much rather than just playing football,” Bryant said. “That's probably one of the biggest things that I've been trying to take and learn from it. As time has gone on, I feel like I'm getting more confident in the playbook and offense while I've been out there. I always feel like I can get better, but I feel like I'm way ahead of where I was at this time last year coming into the offense.”

Being in the same room as Watson also helps.

“Deshaun is very knowledgeable of the game, and that's one thing that I noticed when I first got here. It triggered it my mind that there are some things that I may not see that someone else may see,” Bryant said. “We may not see it, but he'll see it, so it's neat. He's always out there during practice to tell us what we're doing wrong, whether it's throwing or a bad read. He's been a huge asset by just being out here.”