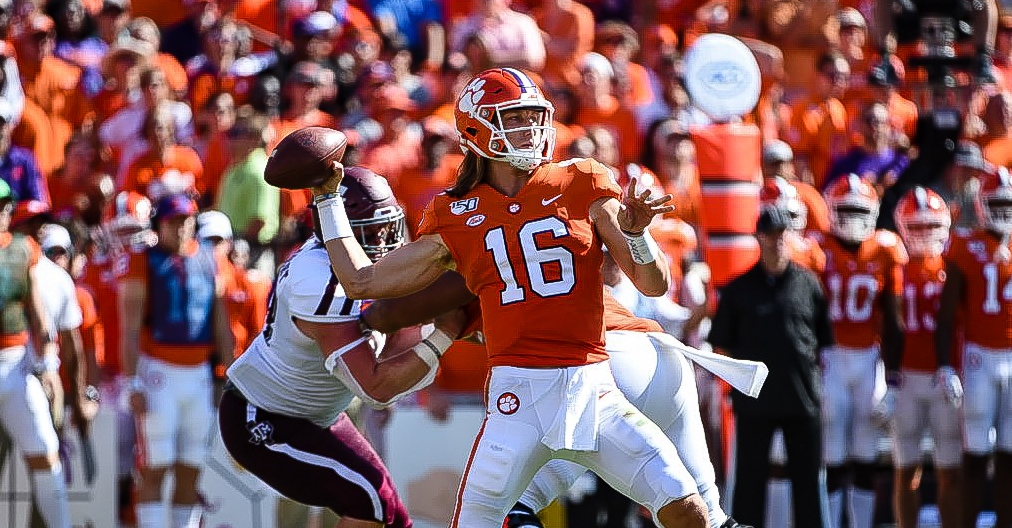 Trevor Lawrence had a solid day against Texas A&M.

CLEMSON – Trevor Lawrence played so well at the end of last season that many fans expect the super sophomore to play perfect every week. It’s too much to ask, especially in the world of big-time college football, and Lawrence knows it.

The only numbers he cares about are in the win column.

Lawrence didn’t have his best outing in the season opener against Georgia Tech but rebounded with a strong effort in the win over Texas A&M last weekend. He’s getting better each week, but he doesn’t care about personal stats.

“It's definitely something you have to keep bringing yourself back to. You're not going to play perfect,” Lawrence said. “Regardless of the expectations, my main goal is to win and be a good leader and to do everything I can to help the team win. So, that's something I am having to keep bringing myself back to. It doesn't really matter what my stats are as long as we're winning and performing well.”

“He does a great job of keeping everybody grounded and he's right. He says we're going to get everyone’s best every week,” Lawrence said. “They circle Clemson when they play us so we know every week we get everyone's best. So that’s one thing that will keep you grounded and to prepare every week because you know you are getting everyone's best. And also, as Coach Swinney said, you haven't earned anything. You've played two games. We're supposedly the number one team but we've only played two games and there’s a whole lot of other good teams, so we're still trying to do that every week.”

He also understands he can get better with the deep ball.

On playing in the Carrier Dome

“It gets really loud and it’s kind of packed in there. We're excited about it. It'll be awesome. Last time the team went to Syracuse I wasn't on the team, but they beat us so we have some motivation going into the game.

Travis Etienne as a receiving threat

“He's great, he's worked hard this offseason to get better with his hands and he's done that for sure. Having that option and his feet and legs and also our passing game. All that put together can be dangerous, so when we have all those phases going its really good.

“It's great. As long as he's not protecting it adds an extra guy. It's a big difference in the passing game. Everyone is covered you can just pass it to Travis. All of our running backs do a good job about that, so it definitely helps a lot.”