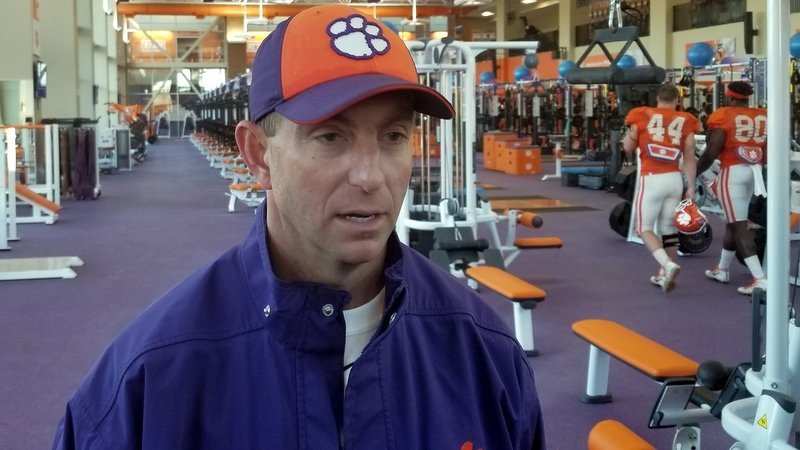 Dabo Swinney is not a fan of players skipping bowl games

Some of the nation’s best college football players have decided to leave their teams a game early, skipping their bowl games in order to prepare for the NFL Draft. Quarterback Will Grier of West Virginia, Houston defensive tackle Ed Oliver, NC State receiver Kelvin Harmon, defensive tackle Rashan Gary of Michigan, and South Carolina receiver Deebo Samuel are part of a large group of players who have elected to miss out on bowl trips.

How does Clemson head coach Dabo Swinney feel about that? He hates it.

“Does it matter what my thoughts are? It doesn't matter. As a coach, if you don't want to play then don't play,” Swinney said Friday. “Let me know who wants to play and let's go play. Now, my opinion is I hate it. I don't like that. People say, 'oh you are the coach and make all that money.' Bullcrap. Listen, my thing is I don't choose to live my life that way.”

The main reason for skipping the bowl game? Players are afraid of a serious injury with money on the line, something that Swinney doesn’t buy into. He also says it’s a consequence of the College Football Playoff, which lessens the importance of most bowl games.

“Personally, I choose to play. Otherwise, why even play your whole senior year? You can get hurt in anything,” he said. “You can get hurt in a car. In fact, you have better odds of getting hurt in a car than you do playing in a football game. So, that is my opinion, but that is also a product of the playoff. Before the playoff, you didn't see that. Now the playoff comes along and guys are like, 'Well, I am not in the final four.' That's an unintended consequence to the playoff system. And not everybody is a first-rounder. Listen, I get it. I understand.”

The Tigers have made the College Football Playoff each of the last four seasons and haven’t had to deal with a player wanting to skip the postseason. If that happens, however, they’ll get nothing but well-wishes from Swinney.

“The flip side is that everybody has to make their own decisions. You can't get mad about it. If that's what you want to do, then go for it. I appreciate it,” Swinney said. “I want to know who's all in. I want to know who really wants to play as opposed to kind of being half in and not really wanting to play. I don't think that's fair. Hey, let me know so I can get the next guy ready. Don't show up and play in the game if you're not 100-percent committed to it.

“As a man of faith, I don't think you can walk around in bubble wrap. I think God's will is going to be done in your life. I don't like it but as a coach, you better embrace it because there is nothing you can do about it. If we've got anybody that doesn't want to play, then love on them and pat them on the butt and wish them well and let's go get the next guy ready.”