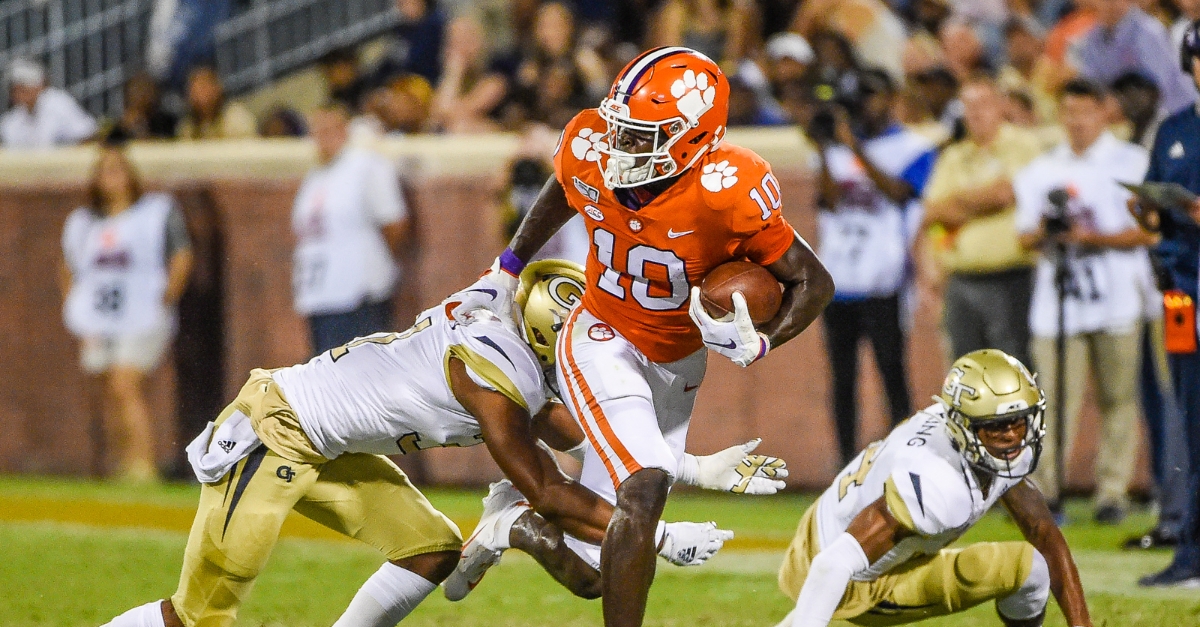 CLEMSON – A constant theme around fall camp was Joseph Ngata’s work ethic, but hard work is just a way of life for the freshman from California.

Head coach Dabo Swinney praised the freshman wideout for his work ethic and eagerness during fall camp -- saying he’s one of the hardest working players he’s ever coached, but for Ngata it’s continuing the lessons his parents instilled in him.

Ngata said many people have contributed to his success and his diligence is his way of thanking them.

“I say it comes from my parents, and also within myself just knowing that a lot of people sacrificed a lot just seeing me here today, so I can't take that for granted,” Ngata said during his first interview at Clemson. “Like I said before, it's just who I am. I feel like I have to work hard and there's a lot of people that have sacrificed a lot for me so there’s no reason that I should not be going hard. I can go on and on, but just sending your son away to college 3,000 miles away is a pretty big sacrifice."

His hard work paid off as he became just the fourth freshman to start an opener under Swinney – joining wide receiver Adam Humphries, left tackle Mitch Hyatt, and defensive tackle Tyler Davis. Ngata took the game’s opening kickoff and just treated it like practice in front of 80,000 people

“I was trying not to be too emotional about it and I tried to keep a level head, but it was more than what I really expected,” Ngata said. “I’ve probably known (he was going to start at kick returner) for probably 2 weeks, but I really didn't know that was the idea when I was getting recruited. The past 7 months we've been practicing so it’s a cool experience. It's a fun experience too.

“I wasn’t really nervous because coach (Jeff) Scott and coach Swinney prepared me for that situation. As coach Swinney explained, make it seem as practice. If you practice hard, it will be how it is in the game. I was not really nervous or not a lot of emotion was going through while the ball was in the air.”

Ngata came to Clemson as one of the top wideouts in the country, but he said he’s willing to do whatever is asked of him.

“I’m just ready to do whatever the team needs me to do. I'll do whatever. I'll play linebacker, I'll play D-end, I'll play whatever,” he said. “It's not really any specific thing that I bring, but I bring a lot of passion. Usually you'll get a lot of passion out of me. I don't know what I am going to do but I’m going to try to get to the end zone.”

While joining one of the best wide receiver corps in the country was a draw for Ngata, that wasn’t the only thing that led him to Clemson.

“I was just focused on myself so it's not really about California football, it's not about Southeastern football, it's just about me and it's about being the best version of myself that I can be,” he said. “It's been everything like Wide Receiver U, but most importantly, it's how genuine everyone was. It's not fake.”

Ngata is far from a finished product, but he’s taking it one game at a time and learning from the older guys in the room.

“I feel like all the jitters got out last game. That was kinda like my first college game and everything, so now I am on to my second college game,” he said. “So, I'll be ready for this one. I think we've all been trying to learn from just ourselves by watching past film study. Like I watch a lot of Tee films from last year,” he said. And, I'm pretty sure he's watched a lot of film from NFL guys, so we are just trying to get better. I have a lot of support from the wide receiver group, like Tee (Higgins), Cornell (Powell), and all of them. They are just encouraging me every day to keep pushing and keep doing it and we were all struggling for a little bit in fall camp with the heat and everything, but just kept pushing and kept trying to get better so that elevated our game.”