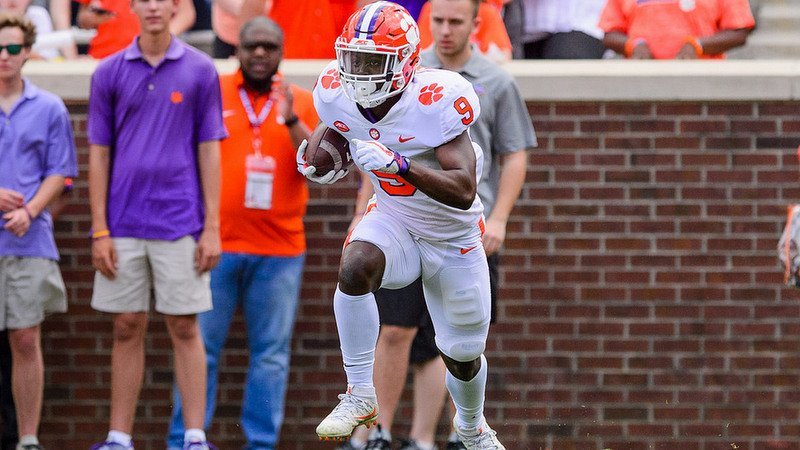 CLEMSON – Second-ranked Clemson enters the 2018 season with two running backs that might start for most of the teams in the country in Travis Etienne and Tavien Feaster. The goal is to get those talented playmakers the ball as much as possible.

The duo combined to carry the ball a little over 15 times per game. Quarterback Kelly Bryant averaged 13.71 carries per game, with 665 yards on 192 carries and 11 touchdowns, an average of 3.46 yards per rush (which also factors in sacks).

With that in mind, I asked co-offensive coordinator Tony Elliott if getting the ball into Etienne’s and Feaster’s hands more this season is a priority and he said yes.

“Definitely, we’re trying to find ways to get him (Etienne) involved in the passing game, trying to find ways to get him easy touches and we want to do that with all of our playmakers, but the problem is you have a playmaker at every position,” Elliott said after Friday’s practice. “You can get caught up majoring in the minors, but you still want to run your core system so we’ve got to be consistent in what we do, call the offense and let the flow of the game dictate and when we can dictate it, we have to take advantage of those opportunities to get some guys some touches.”

Part of Clemson’s offense is the run-pass option (RPO). On any given play, three things could happen and it all began by reading an unblocked backside defensive end.

1. If the defensive end attacked the quarterback he would hand it off to the running back.

2. If the defensive end crashed down the line, the QB kept the ball and took advantage of that vacated space.

3. If the QB kept the ball and the corner tried to close on him, the pass option came into play and the QB would dump it over his head to a wide-open wide receiver.

I asked Elliott if Bryant’s carry total was more a by-product of what the defense was giving the offense or the quarterback making the incorrect read, and he said Bryant did a good job of managing the offense.

“Without having my stats right in front of me, it’s hard to say but I think he did a good job. He did a really good job of managing the game,” Elliott said. “There were probably a couple of more things we could’ve taken advantage of on the perimeter, but in terms of managing and ready overall, he did a good job. Obviously, in the last game, we had some issues that we hadn’t had. We’re not as balanced and we’re not playing in the Sugar Bowl if he doesn’t read those things.”

Elliott said defenses also played the Tigers differently once the running backs had a little success.