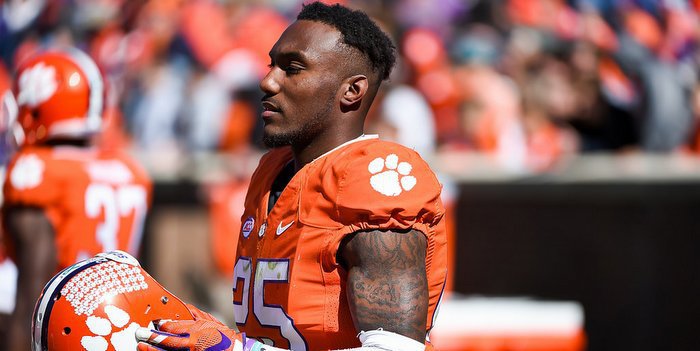 Tankersley hopes to have an exciting end to October

CLEMSON – Like every other person associated with the Clemson football program, cornerback Cordrea Tankersley is looking forward to a late October date with Florida St. in Tallahassee. Before he can think about the Seminoles, however, he has another date to think about. A due date.

The Tigers’ senior cornerback is anxiously awaiting the arrival of a son, and the due date is October 28th, the day before the Tigers play the Seminoles in Doak Campbell Stadium. That date is also the birthday of his father, George, but the hope (and plan) is that doctors will induce labor during the Tigers’ open date.

Tankersley said preparing for the birth of a child has changed the way he looks at life and football.

“It has changed my life tremendously knowing that I'm bringing a new baby boy into the world,” Tankersley told TigerNet this week. “It's making me progress my level every day, and I think about him every day. I go out and play hard every day, not only for him but also for my family and for the love of God.”

The man they call Tootie is dedicating his senior season to be the best player he can be in the hopes that an NFL team will come calling, allowing him to give his son the kind of life he hopes to provide.

“It's exactly what I do it for. Every day that I come out here and grind, I'm trying to set an example for him,” he said. “He's not here yet, but I'm still trying to push and grind. When he gets here, I'm just going to continue doing it and become the father that I know I can be.”

Tankersley hopes to have an exciting end to October "

Tankersley was solid in his first season as a starter, earning third-team All-ACC (media, coaches) honors. He led the team with five interceptions and 11 pass breakups and had 60 tackles in 887 snaps over 15 games (15 starts).

Those stats mean nothing to him now.

“When I came back, I wanted to start all over. Last year's picks and tackles were last year's,” Tankersley said. “It's a new year. I always want to be a student of the game and just continue to grow and continue to get better and try not to let last year overwhelm this year. It's a new year and I just want to grow to be a technician and learn how to use my hips more and learn how to play off coverage more.”

Tankersley feels like he is ready for the challenge of another season, and one of the main reasons is receiver Mike Williams. Williams missed most of last season with a neck injury, but looks better than ever during the first part of August camp. Tankersley and Williams go head-to-head every day, and Tankersley said he won’t face anyone better once the games start.

Tankersley is the lone returning starter in the secondary after the loss of corner Mackensie Alexander and safeties T.J. Green and Jayron Kearse. Replacing last season’s stalwarts are a bunch of talented but young and inexperienced players.

“You could've thrown those guys in last year and we would've been just fine,” Tankersley said. “I just feel like we're picking up right where we left off. We had some great guys in T.J. Green, Jayron Kearse but we all practice on the same field. We just grind. Somebody had to go out before somebody. If throw those two in, we still win. We've got guys. The coaches, it's their job. We'll sit down and study the film and get ready whether it's me, Trayvon, Mark Fields. It doesn't matter. When it's time to go play, we'll be ready to play.

“A lot of the young guys - K'Von Wallace, Trayvon Mullen - those guys have come in and they're looking really good. At defensive end, Xavier Kelly, he's doing really well. We all have to continue to grow and get better, but those are the ones that stand out to me so far, along with Dexter Lawrence.”

Mullen is one corner who has impressed, along with Wallace.

“He's just a guy who wants to be great. He wants to understand the game. He asks questions,” Tankersley said. “If he doesn't know anything, he's going to ask questions. He's a technician, so he's going to study his technique. He's going to watch the people in front of him and he's going to go out and execute. I like his attitude and his mindset.

“K'Von is another guy who asks a lot of questions. I think he the freshman who asks the most questions out of everybody. He didn't come in as the highly recruited guy, so he has to play with that hunger and that edge. You can tell every day that he comes to the field.”