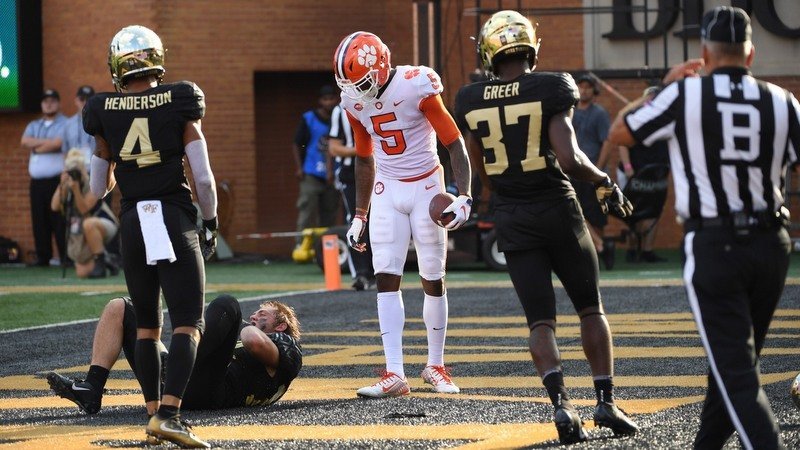 Tee Higgins stands over a Wake defender after a touchdown

ESPN’s Desmond Howard called Clemson’s offense ‘finesse’ this morning on ESPN’s College GameDay and said they weren’t capable of playing the smashmouth style of football it takes to win championships.

"The expectations are through the roof coming into the season," Howard said Saturday morning. "If you make a quarterback decision like Dabo (Swinney) made, everything is at risk, everything is at stake. I think the quarterback situation is going blow up in their face at some point in the season. I don't see them being a physical outfit offensively. They are more of a finesse group. They are not going to be a smash mouth group.

“You can't change who you are in the middle of the season. You are who you are. You are what you are. I think the quarterback situation is going to catch up with them and the defense hasn't been as dominant as people have anticipated with that four defensive linemen all NFL caliber studs. It will catch up with them at some point. I think they are going lose a regular season game and maybe the ACC Championship game."

Clemson’s offense heard those comments loud and clear and responded in a big way.

The Tigers rushed for 400 yards with Travis Etienne’s 167-yard effort leading the way in a dominating 63-3 victory over Wake Forest Saturday afternoon at BB&T Field.

Clemson had three players reach the 100-yard rushing mark in a single game for only the sixth time in school history. It's the program's first time accomplishing the feat since Sept. 30, 2006, vs. Louisiana Tech (James Davis, CJ Spiller and Demerick Chancellor).

After rushing for 293 yards last week against Syracuse and 400 yards against the Demon Deacons, co-offensive coordinator Jeff Scott suggested that Howard may want to check his facts before calling Clemson’s offense ‘finesse.’

“I couldn't be more proud of the way our guys responded. Offensively, I think over the last four games I think we're averaging about 300 yards rushing per game. I think Somebody needs to send that to Desmond Howard so he can get his facts straight," Scott said. "It's hard to be a finesse group when you are rushing for 300 yards a game. You would agree with that, wouldn't you?"

Scott’s counterpart Tony Elliott wasn’t as quick to snap judgement and said it’s up to Clemson to change Howard’s thinking.

"That's what they get paid to do," Elliott said. "They get paid to entertain and commentate. I know Desmond and he is a good guy. I don't have any ill will toward him. Obviously, we’ve got to prove it. We’ve got six more games and hopefully, we earn our way to a championship. And then an opportunity to play in the playoff, and we continue to run the football we can change the narrative."