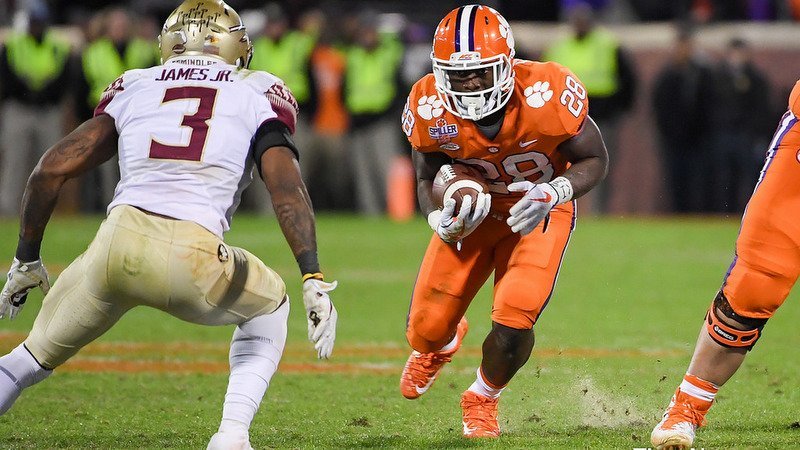 CLEMSON, SC- With spring practice coming to a close, Tavien Feaster reflects on the spring he had as well as the game this weekend.

“It has been a long year for us. It feels like we just came off the field in New Orleans," Feaster told TigerNet earlier this week. "I was happy to get back at it but I’m glad it is winding down.”

Feaster hasn’t made his goals for the 2018 season yet, but he is pleased with his spring progress.

“My spring goals were to get better," Feaster said. "I wanted to focus on the fundamentals and regroup. Better on pass protection and footwork. I’m not all the way where I want to be, but I took the steps in the right direction this spring and I am pleased with it.”

One of the steps he took was trying to drop some weight, and he has already seen results on the field.

“I’m almost there. A couple more pounds and I think I will be alright," he said, adding that he played at 220 last season and hopes to be around 215 this fall. "I feel really good with my endurance and stamina, and I am a little bit faster and quicker than last year.”

To transition into the right direction, it took cutting out every day things in his diet to reach his weight goals.

“The diet has been rough cutting back. I never really drank soda, but basically cutting back on Gatorade and lot of fast food," he said. "I’ve been transitioning well, though.”

With many different veterans in the room, Feaster told TigerNet that Adam Choice not only bring his leadership skills, but also his passion for the game to the table.

“He helps us of course with depth, but he is another guy that runs the ball hard," Feaster said. "He is passionate about what he does out here on the field and brings that leadership to the room."

That leadership does not end with Adam Choice, but rather than all the other guys in the room pushing each other as well.

“We push each other day in and day out. It’s a fight," Feaster said. "All the guys in the room I think have gotten better this spring. I think that’s the power that we have to bring to the table and everyone is getting better.”