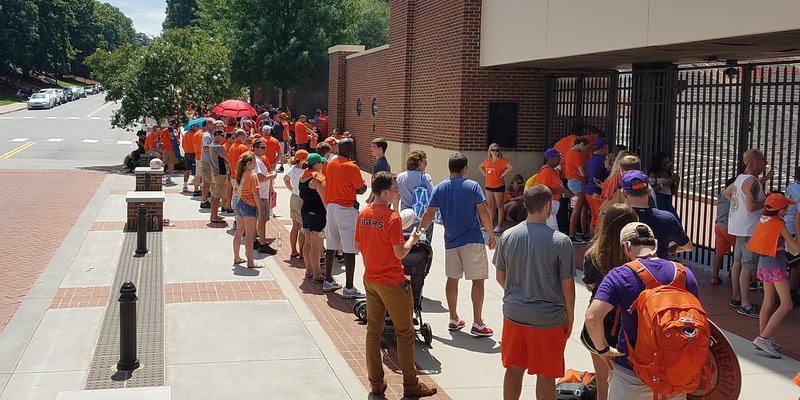 CLEMSON – Fans began to arrive around 5 a.m. Sunday morning, braving a lengthy wait and the brutal sun for the chance to snap an autograph from head coach Dabo Swinney, wide receiver Hunter Renfrow or their favorite player.

The National Champions held Fan Day Sunday afternoon at Memorial Stadium, and Robert Priester of Columbia was excited about the chance to meet Renfrow.

“We got here about 7:30 a.m., and we love our Tigers and support them thick and thin,” Priester told TigerNet. “We are here to see Hunter Renfrow, the hero of the year. Deshaun isn't here anymore so Hunter is the guy. I have the magazine and a football for him to sign. If they let me hug him and kiss him, I will do that, even though that might cross the line.”

Clemson employee and fan Kyle Cutler and his wife Emily found themselves in the middle of a long wide receiver line a little before 11 a.m, and he said that like others, he needed Renfrow’s signature to complete his collection.

“I have a Clemson room, and I feel like to finish that off, at least for the National Championship, you have to have the Hunter Renfrow signed Sports Illustrated,” Cutler said. “That's really what brought me out here today. We will probably move to some of the other lines if possible.”

James McNeely of Easley drove to the stadium around 11 p.m. Saturday night to see if anyone was already in the Swinney line. No one was, so McNeely and his father showed up a little after five so they could be the first ones in line. 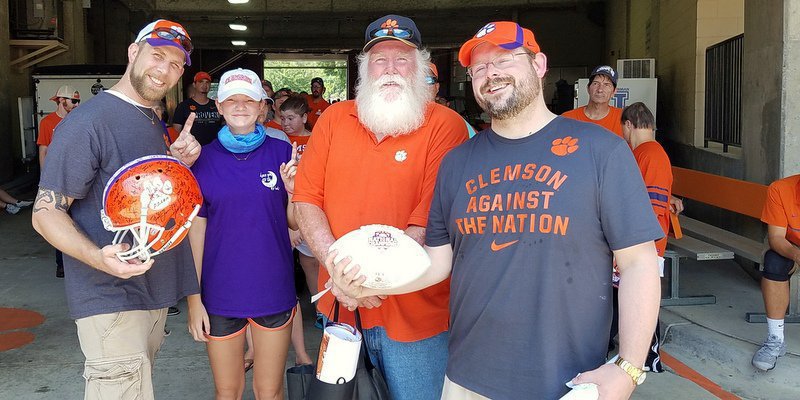 “We got here at 5:20 this morning. We’re really excited about seeing Dabo and getting his signature right after winning the National Championship,” McNeely said. “We were just really excited about getting here and didn’t want to miss out. We love all of those guys and I’d love to get every one of their signatures, but Dabo is the man. He’s our leader and he is the guy that we want to see and get his signature after our second national championship.”

McNeely had a few things he wanted to be signed.

“I’ve got a football that has the schedule on it. It says National Champions and it’s got the final score the game. It’s got that beautiful goose egg next to Ohio State, and that’s what I want his signature on, so I can put it in my trophy case,” he said.

His father, Roy McNeely, said they learned a valuable lesson about arriving early a few years ago.

“We’ve been planning this a long time. We planned to get here early, so we got here at 5:20 because one year we came about 10:00 and we didn’t even get in the stadium,” Roy McNeely said. “We made sure we were going to get in the stadium and get Dabo’s signature. I’ve got Danny Ford’s signature from the 1981 national championship and I want Dabo as the 2016 national champions. And when I see Dabo I’m going to say, ‘Congratulations, coach. I knew you could do it.’”

Walt Chapman and his daughter Skyla Cook of Charleston made the drive up Friday just so they could get Swinney’s signature on a helmet – Chapman has the signature of every member of the title team except for the head coach.

“We got here Friday night. I love Clemson and I love the Tigers. I can’t say anything more about it,” Chapman said. “I was born and bred a Tiger. I got out here about 6 a.m. where I was second in line. All of the players from the national championship team last year signed a helmet, except for Dabo Swinney and I want to get that. My wife is a Georgia fan, but she’s responsible for making this happen. She is in another line getting something signed.”