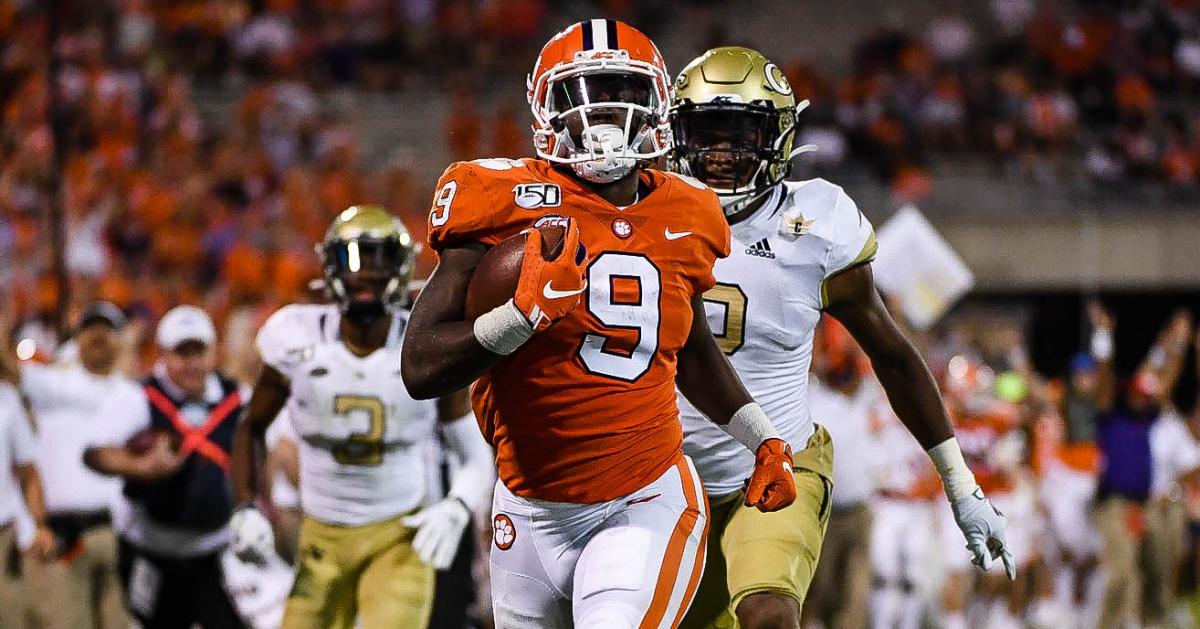 Travis Etienne had a career-high 205 yards

CLEMSON – Clemson did exactly what it was supposed to do in the season opener.

Travis Etienne ran for a career-high 205 yards and Tee Higgins added a long touchdown reception as No. 1 Clemson defeated Georgia Tech 52-14 Thursday night at Memorial Stadium. Clemson improves to 1-0 overall and 1-0 in the ACC, while Tech falls to 0-1 in both categories.

Etienne also scored three times and tied for the longest run in Clemson history with a 90-yard touchdown romp in the first half.

The Tigers took the opening kickoff and were forced to punt, but Georgia Tech gave the ball right back. Will Spiers’ 42-yard punt hung in the air long enough for the coverage to get down the field, and Tech’s Jalen Camp fumbled the catch. The ball was recovered by Baylon Spector at the Tech 16-yard line, and six plays later Lawrence took the read-option and waltzed almost untouched into the endzone for a six-yard touchdown and a 7-0 Clemson lead.

Etienne fumbled the ball away on Clemson’s next drive, but after the defense forced a punt Etienne redeemed himself in a big way. The Tigers took over on their 20, but a holding penalty on the first play of the drive pushed it back to the ten. Etienne took a delayed handoff and sprinted down the left sideline for a career-long 90-yard scoring run. The touchdown also tied for the longest scoring run in Clemson history. With 5:39 to play in the first quarter, Clemson led 14-0.

With the touchdown Clemson ended Georgia Tech’s streak of 68 straight season-opening games allowing no more than 10 1st-quarter points, which was the 2nd-longest streak by a major-college team since classification began in 1937. The longest? Clemson: 71, 1937-2007.

Two drives later, the Yellow Jackets faced a 3rd-and-1 inside their own 20, and linebacker Chad Smith punched the ball out and it was recovered by Xavier Kelly at the Tech 14. One play later Etienne burst almost untouched through the middle for a 21-0 lead barely two minutes into the second quarter.

Later in the quarter, Lawrence threw an interception that looked like it would be returned for a touchdown, but Lawrence raced down the field and knocked the defensive back out of bounds on the two. On three consecutive plays the Jackets tried the middle of the Clemson line with no success, and on 4th-and-goal at the one quarterback Tobias Oliver rolled right and was flushed by Xavier Thomas. His flip into the end zone was tipped and then intercepted by Denzel Johnson and returned to the Clemson six yard line.

Five plays later Lawrence hit Tee Higgins down the middle of the field – Higgins high-pointed the ball over the defensive - and then outran the defensive back into the endzone, punctuating the run with a stiff arm to the Tech defender’s helmet as he finished his 64-yard reception. With 4:34 to play in the half Clemson led 28-0.

Clemson forced a Tech punt to start the second half and it took Etienne exactly two plays to hit paydirt. Etienne ran off tackle for a 12-yard gain to start the drive, and busted loose for a 48-yard touchdown that gave Clemson a 35-0 lead.

A 54-yard swing pass set up a seven-yard touchdown run by Jordan Mason, and the Jackets trailed 35-7 with 11:40 to play in the third quarter.

The Tigers responded with an eight play, 77-yard drive that took 3:25 off the clock. Lyn-J Dixon ended the drive with an 18-yard scoring run, and Clemson 42-7 with just over eight minutes to play in the third quarter.

Two drives later, the Tigers put together a seven play, 67-yard drive under the leadership of backup quarterback Chase Brice. Brice lofted a picture-perfect lob into the end zone for freshman Frank Ladson, and Ladson hauled it in for a 21-yard touchdown, the first of his career. Freshman running back Mikey Dukes picked up a blitzer on the touchdown throw. With 14:54 to play in the game, Clemson led 49-7.

Georgia Tech added a late touchdown and Clemson’s B.T. Potter nailed a 51-yard field goal with just over six minutes remaining for the final score. It was the first 50-plus yard field goal for the Tigers since Chandler Catanzaro hit a 50-yarder against Tech in 2013.