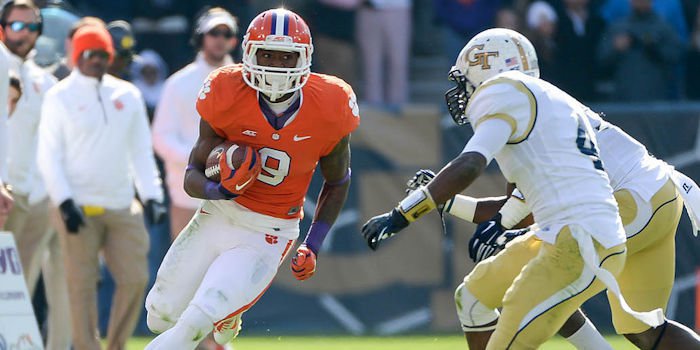 Elliott talks to the media Monday

CLEMSON – Offensive coordinator Tony Elliott met with the media Monday morning in the WestZone and he covered a variety of topics, from his last game as a player at Georgia Tech to this week’s contest in Bobby Dodd Stadium against the Yellow Jackets.

Here is his Q&A with the media:

What are your memories of your touchdown in the 2003 game?

“To start with the memories of that game, I actually had to steal that ball away from the DB to get credit for the touchdown, but obviously, we're aware of how long it's been. I was actually telling a joke, because you know you would get those stories from your parents, 'This hasn't happened since I did it.' I was telling some of my guys, we haven't won down in Atlanta since the last time I played. We are reminded of that, but each year is a new team and a new opportunity. We're not defined by what we did in 2003. We have to go down there and create our own legacy. We are going into a game against undefeated Georgia Tech team that is coming off of a big win over Vanderbilt. They are playing with a lot of confidence of defense, so we're going to have a challenge.”

What makes it so challenging to play down there? 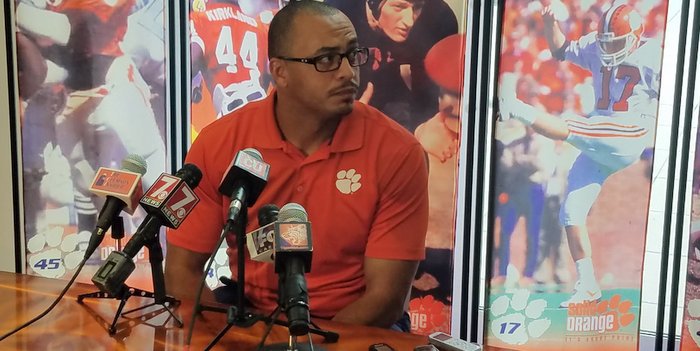 Elliott talks to the media Monday "

“I don't know. The times when I played, we went down there and won, but it's always been back and forth with Georgia Tech and if you go back and look at that stretch, they won some games here. They came into The Valley and won some games. I remember, Kerry Watkins, the receiver who caught the one-handed touchdown and beat us. He caught the ball in the back of the end zone and we thought we had the game won. It's just a great rivalry. They step their game up, just like we step our game up. It's just one or the other. It's our crossover, so every year we are going to play them, so it's a natural rivalry. We have a lot of guys from the state of Georgia and just a lot of excitement. It's a neat little environment - it's not a big environment - they get loud and crank the music up and they are always excited to play when they play Clemson.”

How important was Saturday’s great start against SC State?

“I think you can say that's important, but that really wasn't the objective. We wanted all of the guys to go out and get off to a good start. More importantly, it was big for us to be able to play the backup guys and get them some meaningful reps. All of the guys got a good fifteen reps or more. That's going to pay off more dividends and have an opportunity to rest Wayne (Gallman).”

“I think everybody when you see them with the ball we know that he's special. As a coach, it's my job to critique, so I'm focusing on the little things. There's a lot of little things without the ball - with the ball he is great - but he still has to focus on ball security. But you saw natural ability take over once the lights came on.”

Was it helpful being able to rest your starters with the short week looming?

“Definitely. You always have to look ahead and you take it day by day and week by week, but in the big scheme of things, we knew we were coming off of a short week and especially getting prepared for that offense with the defense it was a big help. And, the same thing for us, we were able to put a couple of work in the bank, so that when we come in on Sunday, we aren't starting over. The guys have some familiarity with it because you're losing two days of preparation and you're trying to combine two practices into one, where you're working different situational things. It was big for us to have an opportunity over the summer to put in a couple of days.

“Being able to do the same thing like we did last year with Louisville is where we kind of learned that this is what we needed to do for Georgia Tech. The biggest thing is making sure our guys know what to do. When we have an extra day of practice, you can tweak a couple of things going into a plan, but when you're preparing on a short week you have to make sure you have your guys ready and understand what you're doing - be simple, play fast and go out and execute.”

“Watching Vanderbilt and watching Boston College, they are more of pro-style, 21 personnel, 12 personnel, shift/motion, do all of those kinds of things. A lot of it doesn't marry up, but what you know about Ted Roof is that he's going to be sound in what he does. He's going to be aggressive. They have a lot of depth on the defensive line and they're breaking in a new MIKE linebacker, their nickel SAMS played a lot of football, and they are also playing another guy in heavy personnel sets and all of their secondary guys may be new starters, but they have some experience. A lot of it is the same stuff that he did last year, but you're also seeing some tweaks and you can see some of the things that he went and studied over the summer to try and implement that better fits the personnel.

“I think two years ago, he played a little bit more coverage. As you watched him last year, he had a little bit more experience on the back end with all of those starters in the secondary and he was more aggressive playing man. Once they got a lead, they were able to sit back in zone and just wait for us to be patient and go down the field and we weren't able to manufacture drives two years ago. Last year, we got to an early lead on them and they tried to be aggressive and put some pressure on Deshaun and play us in man coverage and get the ball out quick. This year, you see a mix of that, but a lot more zone coverage as opposed to last year.

“I think they are experienced at defensive end. They have some interior guys that are replacing #96 (Andrew Gotsis) who was a really good player. He was a draft pick for them last year. Number 40 (P.J. Davis) is their best player, the WILL linebacker is all over the place and he is going to be fired up to play against us. Schematically, on the back end, you can see that they have played a little bit, but not quite the cohesion that they had last year to be able to make the adjustments on all of your motions, so you're seeing a lot of the same structure, but you're seeing more of playing base until they get their rhythm and chemistry together.

Does the familiarity of the rivalry make this game so tight each year?

“I think there is some truth to that. Going back to that game, I don't like to remember the one where Woody (Dantzler) scored because I spent the whole game in the locker room with a broken wrist. I broke my wrist on the first play of the game covering the kick-off, so I think Dr. Bowman is still mad at me for that because he reminds me that he missed that game and didn't get to see Woody score that touchdown because he was in the locker room with me. And in 2003, everything came together that night. We know that we're going to play each other every year. We're right down the road and you have the academic rivalry in terms of the engineering and what they do on their campus and what we do on our campus. I think the proximity, opportunity to play every year brings out the best in both programs.”

Will you still try and go fast against Tech?

“Of course, tempo is what we do, but then you also have to understand their philosophy with the option offense. They are going to limit you in possessions, so you have to make sure that you play fast, but efficient. You want to stay on the field as long as you can to help your defense. You want to make sure that when you do get your opportunity with your drives you capitalize. Statistically, when you look at it, you're going to get anywhere from twelve to fourteen drives, but when you're playing a team like Georgia Tech, you're look at nine to ten. Especially, when they're rolling and you have some turnovers the next thing you know, your possessions are even more limited. You want to play fast, but efficient. You have to make sure that your drives count. You want to put the pressure on them. If you can score some point, there offense isn't necessarily built to come from behind. They are built to play ahead.”

“Maverick (Morris) is continuing to make progress. (Justin) Falcinelli is a guy that is also making progress. I was pleased with big John (Simpson). He still has some things that he has to continue to learn in the playbook. (Tremayne) Anchrum and (Sean) Pollard are the guys that played well. I think we have a solid ten guys that we can feel like we can roll. How the game is going will determine how the rotation goes.

“I think it's a tough situation. You go down and you play a top defensive front, like you did at Auburn, and you don't give us a sack and then Troy did some things to challenge us early on. I don't know if we have enough evidence to give a fair evaluation, but so far, so good. We have to challenge those guys each and every day to be consistent in everything that they do. It's going to be a good challenge for them. Now, we're into the stretch. With a couple of more games under our belt, we'll be able to determine. I don't think it's fair to make an assessment this early in the season on how they're playing.”