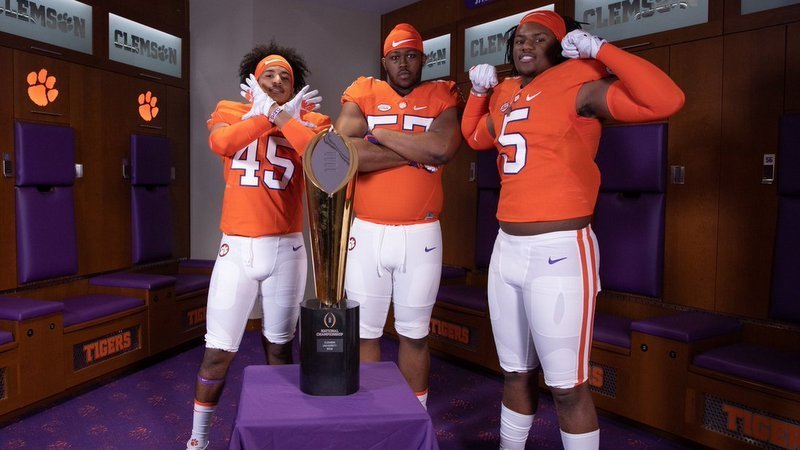 When it comes to recruiting, Clemson head coach Dabo Swinney is known as “the closer” and Saturday’s elite junior day was no exception.

Swinney wrapped up Saturday’s recruiting extravaganza with a 90-minute presentation that talked about what it means to be a Tiger, and the results are as expected. I spoke with several of the prospects on hand, including Bryn Tucker, Henry Gray, and Mitchell Mayes, and they all said that Swinney’s speech was the perfect way to close out the weekend.

“I LOVED it!! His words yesterday had a major impact on how I think about everything and also a major impact on my recruiting,” Greene said. “Coach Dabo reminds me a lot of my high school coach Loren Johnson.”

The big news to come out of the weekend centered on the two commitments – linebacker Kevin Swint and defensive tackle Tre Williams. However……the one player I wanted to hear from was 5-star defensive lineman Bryan Bresee.

I watched Bresee in action at The Opening in Frisco, TX, last July and was blown away. He consistently out-performed the older defensive linemen in drills and showed why he’s considered to be among the nations top five players for the 2020 recruiting cycle regardless of position.

Bresee made the trip to Clemson with his family and spent time with Williams, the Tigers’ newest commit. I was told Clemson feels good heading into the spring.

I also spoke with 4-star cornerback Henry Gray out of Miami (FL) Central. Gray told me that Clemson is his leader and that Swinney’s speech also struck a nerve. He said that Swinney told the players he doesn’t want them to commit until they are 100 percent sure, but once they do then the Clemson coaches will be 100 percent committed in return.

Gray was once committed to Miami (FL) but dropped his commitment after former defensive coordinator Manny Diaz left to take the job at Temple. Head coach Mark Richt later left and Diaz returned to the program, but the feeling here is that Miami is on the outside looking in at Clemson and Ohio St. We will have more on Gray and his thoughts on the visit in the next day or so.

Another big-time prospect who took notice of Swinney was 4-star offensive line Mitchell Mayes out of Raleigh (NC) Sanderson. Mayes is the nation’s No. 3 offensive tackle in the Top247 Player Rankings, and he said that Swinney impressed his mother, who made the trip.

“I got to spend time with Coach Swinney, something I’d never done before,” Mayes said. “I think my mom really liked everything, too. It was great to be able to build a relationship with all of the other offensive linemen that were there, and we had fun at the photo shoot. But Coach Swinney’s message at the end of the day really meant something.”

Four-star wide receiver KeAndre Lambert told TigerNet that he came impressed with everything he saw.

“Everything there is all about family. The atmosphere there makes you feel at home,” he said. “I had fun trying on the uniforms and taking pictures, but we also took a tour of the campus. It’s a really nice place.”

Top safety prospect Chris Thompson, Jr., of Duncanville (TX), talked to me before getting on a plane back to Texas and said Clemson has definitely made a jump in his eyes.

“I thought Coach Swinney’s speech was the most intriguing part of the visit,” Thompson said. “You can tell there is nothing fake about him. He is very authentic. The coaches have told me I am their top prospect for the 2020 class.”

Should i make this official? #ALLIN pic.twitter.com/WUq9DA6GeN

Had an unbelievable experience at Clemson University #ALLIN pic.twitter.com/n02QNlHX6o

Clemson got something special going on here... I’m #ALLIN pic.twitter.com/VZKfZKqmrF

After having a great visit, I am proud to say I have received an offer from Clemson University ?? #ALLIN pic.twitter.com/ShnCMgt86w

Come to the Spring game?? https://t.co/BjyGgslcvn

Unbelievable unofficial visit to @ClemsonFB Extremely blessed beyond measure to have had this opportunity thank you Coach @dpearma for this opportunity #follow #your #dreams #TrustGodnomatterwhat pic.twitter.com/StRTCSuVBe

Unbelievable day at Clemson’s Junior Day. Met some great people and got to see some of the best facilities in the nation. Thanks @bigjohnp2020 and @ClemsonFB for having me. #ALLIN @CarterGrizzlyFB @FtballAtTheView @RecruitGeorgia pic.twitter.com/qrmteVBcxA

Had an awesome time at Clemson yesterday. Thank you to @CoachVenables, @CoachToddBates & the remaining coaching staff! #ALLIN pic.twitter.com/WiZ2hkrBVj