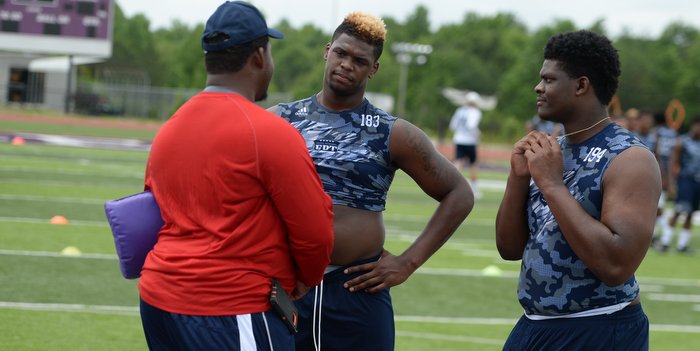 Pickens was one of the highlights of the Showcase

Two big-time defensive line prospects (and former teammates) made the trip. Stephon Wynn, a 2018 4-star defensive end/tackle out of Bradenton (FL) IMG was there with his father, Stephon Wynn, Sr., who was one of the coaches. The elder Wynn played tight end at Clemson.

Before the younger Wynn transferred to IMG, he was at Anderson (SC) T.L. Hanna, along with 2019 defensive end Zacch Pickens. Pickens made the trip to Columbia with his mother, and both players worked out.

Quarterback prospect Bubba Williamson, who has an offer to walk on from Clemson and a full ride offer from South Carolina St., made the trip and was part of quarterback group that included former Clemson target Dakereon Joyner and Jackson Muschamp, the son of South Carolina head coach Will Muschamp. Muschamp watched the proceedings with 2017 Gamecock signee Jay Urich, who grew up a Clemson fan but signed with the Gamecocks after not receiving a Clemson offer.

Two players we had hoped to see – and were scheduled to make the trip – were Cane Bay ATH R.J. Roderick and Clemson 2018 tight end commit Braden Galloway. Galloway texted and said he was supposed to be baptized Sunday and didn’t make the trip.

Pickens was one of the highlights of the Showcase "

Roderick is an interesting case – most schools are recruiting him as a defensive back, but Clemson running backs coach Tony Elliott is recruiting him as a running back. Roderick wants to enroll early and has pinpointed a decision date of July (and we’ve heard South Carolina is his leader), but he wants to make the trip to Clemson for a visit before making that decision.

Ok, on to what we saw and heard.

*Wynn. Wynn, a Clemson legacy, was high on Clemson and Clemson was high on Wynn until recently, when both sides cooled on the recruiting front.

I watched Wynn work out and he’s everything I thought he was – strong, fast, good feet and he was one of the leaders of the defensive line group. Alabama has come after Wynn hard, as has Georgia, and it’s my feeling that Georgia leads right now.

I asked Wynn what changed with the Tigers, and he said, “I haven’t really been talking to Clemson much. Me and Coach (Todd) Bates haven’t really clicked. I was always good with Coach (Marion) Hobby and Coach (Dan Brooks), but I am not like that with Coach Bates. At this point, Clemson is out of consideration. I don’t care where I play – end or tackle – I just want to play. Alabama, Georgia and Ohio St. are some of the schools that are recruiting me the hardest.”

*Pickens. He was easy to spot as soon as he walked into the stadium. At 6-5, 272 pounds, he was maybe the most impressive-looking athlete out there. We will have a story on him later, but after talking with people I get the feeling Clemson and Florida St. are still the front-runners. He was on campus for Clemson’s dominating win over South Carolina last November and came back to tour the new football operations center in late March, where he also took in a practice.

He’s getting to know Bates but says he hears the most from defensive coordinator Brent Venables. He and Wynn tried to team up as much as they could during drills, under the watchful eye of former Clemson defensive lineman Rashaad Jackson.

Both can flat out move, and both have the size to play inside or outside – right now.

*Williamson. Williamson told me he has family members buried in Clemson Tiger paws, and it’s obvious he loves Clemson and wants to be a part of everything going on. He said he is given a hard time by his friends, who point out he would be on campus at the same time as Zerrick Cooper, Chase Brice, Trevor Lawrence and Hunter Johnson, but he said he doesn’t care. If he chooses Clemson, he just wants to do whatever it takes to help the team win.

I watched Williamson run through several drills, and he’s no slouch. He has nice touch on the ball, and his footwork was among the best out there. You can tell he’s worked with a quarterback coach – he has a nice release point and flows through the drills effortlessly.