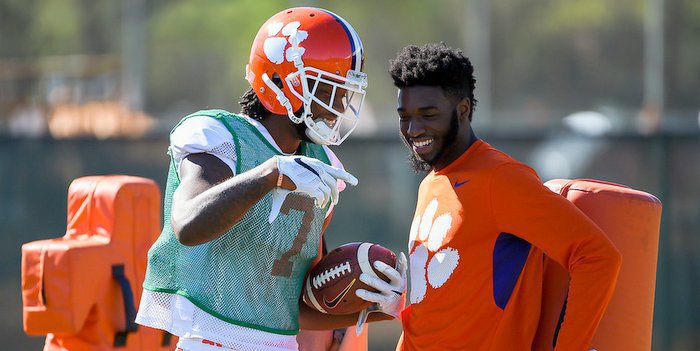 CLEMSON – One of the biggest question marks surrounding Clemson’s football team heading into spring practice centered on a player who hasn’t participated in practice. So far, the questions have been answered in a positive way.

Deon Cain, the No. 2 wide receiver in the 2015 signing class according to ESPN, was the Tigers’ second-leading receiver before he was abruptly sent home -- along with two teammates – a few days before Clemson faced Oklahoma in the Orange Bowl in the first round of the College Football Playoff.

Cain didn’t participate in the National Championship game against Alabama, and head coach Dabo Swinney announced just before the start of spring that Cain still had work to do to get back in Swinney’s good graces and wouldn’t be allowed to practice with the team during spring drills.

Cain finished the 2015 season with 34 catches for 582 yards and five touchdowns and became a downfield threat in the passing game, but he had already missed Clemson’s win at Miami earlier in the season and many wondered if Cain was doing just enough to earn a ticket out of Clemson.

However, wide receivers coach and co-offensive coordinator Jeff Scott told the media Wednesday that Cain has done everything he’s been asked to do.

“He's been held responsible to be in all of the meetings and he's allowed to do everything except practice,” Scott said. “And when you do that, you have two options - some guys are disengaged and just there because they have to be there and they are on the sidelines looking around and not really engaged. But Deon - every play he has been out there in the middle of the field standing next to Coach Swinney, calling out the play and standing there going through the play in his mind and calling out the different reads and things.”

“He is doing what Deshaun did last year, to be honest, whenever he was out there getting mental reps,” Scott said. “He's been engaged and doing the things he needs to do off the field.”

Scott cautioned that Cain still isn’t completely out of the proverbial dog house, but also said he’s proud of how Cain has handled a difficult situation.

“He's not at the end of it yet, and he still has things he needs to do and it's going to take time and consistency. But I am proud of him,” Scott said. “He knows what he has to do, and it's been clearly communicated to him from Coach Swinney and so far he's done that. He's on the right track, but we will check in next month and see where we are.”