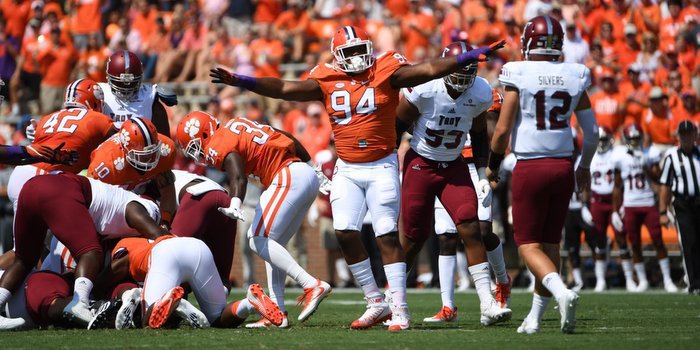 For three-plus quarters, Brent Venables was happy with his Clemson defense Saturday.

But the final two drives by Troy proved to be a struggle for the Tigers.

Trailing 27-10, the Trojans scored touchdowns on their final two drives to pull to within six points with 44 seconds to play, but Clemson recovered an onside kick attempt by Troy to survive with a 30-24 win.

Troy finished with 386 yards, but 154 of those yards came on the final two drives as the Trojans went 86 yards in 14 plays and 68 yards in eight plays.

“We’ve been really good, and all of the sudden, next thing you know we’re up by 28. We couldn’t do that (Saturday).”

On the 14-play drive, the Tigers had two pass interference penalties and a facemask penalty. On the eight-play drive, they had a roughing-the-passer penalty.

“There at the end, we’ve got to be more precise, tighten some things up,” Venables said. “I did not like that at all, but we aided it by two or three PIs and a late hit, or whatever, maybe hit the quarterback low. Helped facilitate a couple of those drives. We’ve got to be better there in those situations.”

Still, there was plenty of good from Venables’ group. He particularly liked how the defense got off the field quickly to start the game and to start the second half.

“I thought that we started the game right … bam, it’s a three-and-out, got off the field quickly,” Venables said. “Same thing, second half, first possession, we did that two weeks in a row. That comes from a group of guys that are focused, they’re intense, that are prepared and that are serious. We’ve got plenty of warts and things we’ve gotta get better at, but again, we played a ton of guys early, and I really feel like that’s going to pay off for us.”

Van Smith led the Tigers with 14 tackles, while Kendall Joseph, Dexter Lawrence and Christian Wilkins each had seven. The Trojans converted just 2-of-15 tries on third downs.

“Midway through that fourth quarter, we gave up two drives late, but up to that point, I’m super proud of them,” Venables said. “I thought they responded to a bunch of adversity. We made some in-game adjustments to stuff they were doing that we hadn’t seen. I really liked that just as far as maturity, the intelligence, their ability to communicate and get some of those things done.

“We made a bunch of huge stops in the game, got off the field on downs and played really well, I believe, on third-down situations. Defended a bunch of possessions (17). That’s a bunch of opportunities to defend.”

Joseph, Jalen Williams and Dorian O’Daniel – all linebackers – each had an interception.

“It’s neat. It probably won’t happen ever again,” Venables said. “That was great. Good for them. Good for them. We’ve got some good athletes there, good ball skills. They were big plays, real big plays in the game.

“Should have had another one on a deep ball, maybe in the first quarter. Should have picked one off, (Jadar Johnson) should have picked that one off. It hung up in the air forever. That’s kind of how the day went right there, that play. It’s like, ‘Are you kidding me?’ But we were able to overcome it.”

That might have been the word of the day for the defense: overcome.

Overcoming its own mistakes, and overcoming the Trojans in the end, the Tigers held on. One on those mistakes came on a key fourth down midway through the second quarter, and it was a mistake Venables said the coaching staff can correct.

Jabir Frye took the short run and broke away for a 66-yard touchdown run to tie the game at 10.

“We had an edge set, but the next level of that edge got caught up,” Venables said. “The tailback went the other way, and our coverage was right in front of us. I’ve got to do a better job of getting them to have the discipline, ‘This guy went by, that guy went that way, and then here comes the jet right at me.’ Again, it doesn’t take much, and unfortunately, it was a huge play.

“By in large that was their play in the first half. It kept them in it there, but super correctable, and it will get corrected. They did a nice job of blocking it up.”