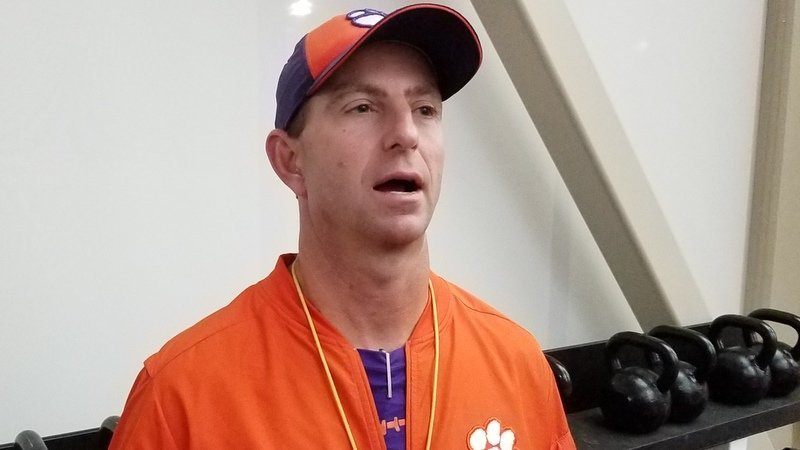 CLEMSON – Dabo Swinney is like a mouse warily circling the delicious morsel of cheese placed within his reach. The cheese looks and smells great, but danger lurks.

No. 2 Clemson plays at No. 17 Boston College Saturday in an 8 pm matchup at Alumni Stadium. On the line is an ACC Atlantic Division Championship, and Boston College head coach Steve Addazio was effusive in his praise of the Tigers earlier this week.

“We are facing an unbelievable challenge playing the No. 2 team in the country in Clemson,” Addazio said. “I will honestly and candidly tell you that this may be the best team I've seen in my career. It's certainly the best team I've seen since I've been at Boston College. They are in the top five in almost every statistical category. They are sensational on both sides of the ball. They are explosive. They have got first-rounders all over the field. They're a legitimate, legitimate big-time team. Alabama is one, they're two, and that's the elite of college football right now by a long shot.”

Swinney’s Tigers practiced for two hours Wednesday night – forced inside late because of rain – and the strains of the Boston College fight song (For Boston) could be heard loud and clear.

In other words, the Tigers aren’t taking any chances with a dangerous Boston College team.

“He says we're the best team in the history of mankind,” Swinney said. “You know, don't take the cheese. We're a good team. And they're a good team. So, I appreciate the compliments, and we've complimented them, but that's two good teams that are gonna battle it out and, and it will be fun to watch. It’s rat poison.”

Swinney said the Tigers are looking forward to the challenge Boston College presents.

“For us, we're excited about our last road trip for the season. This is it for us,” Swinney said. “Last true road game for our seniors. This has really been a special group of seniors that we've had in our program for the last several years. Kind of the end of the road, if you will, from a road game standpoint.

“Not just any game either, an opportunity to compete for our division, opportunity to stay in control of our destiny. There are so many great things to compete for in this game. It's Game Day, so there will be a lot of excitement. Man, we got a huge challenge in Boston College. Really impressed with their team. They've gotten better and better as the year has gone. Tough, physical, well-coached team on both sides of the ball. Do a great job in special teams. No doubt, this will be a great game. I think two teams that have a lot of pride in what they do and how they do it. Only one team can win. Excited about this challenge.”

Addazio doubled down on his praise of the Tigers earlier Wednesday, saying he’s impressed with the job Swinney has done at Clemson.

“I have to say that I've always been really impressed with Dabo Swinney and the job that he's done at Clemson. But they're really just such a really elite coached team on all three phases,” Addazio said. “Their coordinators are phenomenal, and Dabo is just obviously a great head coach who's maintained a level of excellence at the highest, highest level with their recruiting, with the management of their program, with just really, really impressed, and I see a team that's probably as elite a team as I've seen in my career. So the challenge for us will be a great challenge for sure. Super excited about the fact that we are home. It will be a great deal of energy in our stadium, and we've had a good week of practice.

“We're looking forward to this big, big challenge that we have in front of us here, but have just the utmost respect for the whole Clemson program, their level of play, how they carry themselves. Just really very, very impressed. With that, I'm happy to answer any questions.”