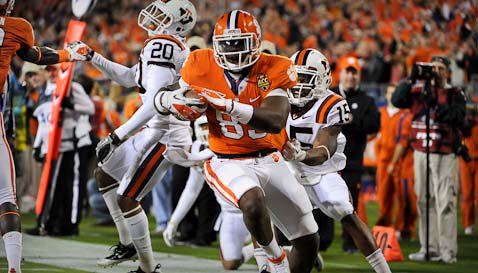 Dwayne Allen had one of the game's biggest plays

We’re down to four.

Clemson has won a conference-record 18 ACC Championships, four in a row, and five since 2011. The Tigers won the ACC Championship in 1991, the first year of FSU in the ACC, but the Seminoles didn’t compete for the championship that season. They were eligible in 1992, however, and dominated the league for much of the next 20 seasons.

The Tigers finally got over the hump in 2011.

The Hokies joined the ACC in 2004 and won four titles between 2004 and 2010, and despite losing 23-3 to Clemson (at Lane Stadium in Blacksburg no less)., the Hokies were favored by many to knock off the Tigers and claim yet another title. The Hokies were riding a seven-game winning streak and Clemson entered the game having lost three of its last four games, including losses to Georgia Tech, NC State, and South Carolina.

When it was over the Tigers had claimed its first ACC title since 1991 and its first appearance in a BCS-caliber bowl game since winning the 1981 National Championships.

The Tigers would go on to the Orange Bowl and loss, but the stage was set for the Tigers’ history decade.

Tajh Boyd was named as the Player of the Game and with good reason. Boyd completed 20-of-29 passes for 240 yards and three touchdowns. Boyd also had 11 carries for 28 yards and a rushing touchdown.

Boyd helped the Tigers turn a 10-10 halftime score into a 31-10 Clemson lead after three quarters.

With the score tied 10-10, Clemson took over at its own 13-yard line on its opening drive of the second half. Boyd proceeded to complete all three of his passes on the drive for 48 yards and added 15 yards rushing. He capped the drive with an 8-yard touchdown pass to Dwayne Allen with 8:11 left in the quarter.

It was Allen who may have come up with the biggest play of the game on the drive when he scooped up a fumble by wide receiver Sammy Watkins at Tech's 28. Tech strong safety Antone Exum appeared to have a chance to recover the fumble, but Allen came up with it to preserve the drive.

After a three-and-out on Tech's next drive, Boyd wasted no time going to the air again. He found Watkins streaking up the field behind cornerback Cris Hill. Boyd hit Watkins with a 53-yard touchdown pass to extend Clemson's lead to 24-10 with 8:02 left in the third quarter and the rout was on.