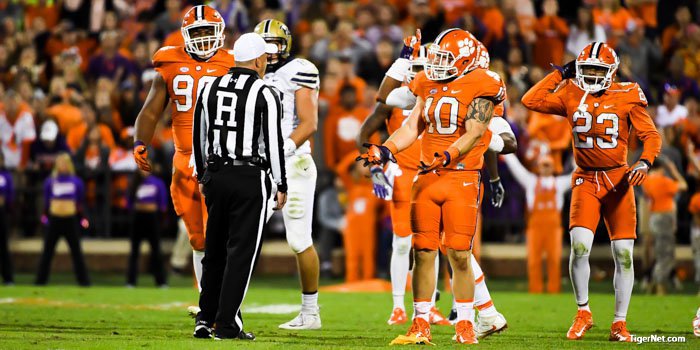 How will Clemson respond to a rare loss?

CLEMSON – Dabo Swinney was shocked when he noticed that only eight or nine of Clemson’s players stuck around long enough to sing the alma mater following Saturday’s loss to Pitt. It didn’t take him long to realize the reason – he has a young football team that hasn’t had to deal with losing, much less losing at home and they didn’t know how to act.

It’s one of life’s teaching lessons for a coach and a program that have grown used to winning, and Swinney made sure to point out that losing isn't and won't be a habit for the Tigers.

"Everybody on this team hates to lose. We didn't really know what to do last night," he said. "I'm glad it is not a habit around here, and it's not going to become one. We came in today and watched the tape. We talked through it, flushed it and move on. Get ready for the next one. That's what champions do. Nobody cares this time next week what happened last week. We got to go and try to find a way to play better this week and find a way to win. That's what we have done. We have done that very well. We had a bad day yesterday, but that doesn't mean we are going to have a bad year. One bad day doesn't make a bad year. Our focus is just finishing up and having a great year.”

He was asked if he would rather lose now – when the team can still make up ground – or later in the season and he laughed before giving his answer.

“I don't ever say if we're going to lose, let's lose now. I don't ever think about that to be honest with you. I guess those are things that play out over the course of the season,” Swinney said. “I think as the season plays out, people will say, 'Oh well, they shouldn't have lost then or it was a good time to lose.' I don't really even process that at all. I don't ever want to lose, but occasionally you do get beat. Last time we lost a game we had to wait nine months. We've got a chance to go play this week so I'm focused on Wake Forest. A little cough syrup is good for everybody from time to time. You hate it.

“We wanted to go 24-0 in our last two regular seasons and that would've been great but it looks like we're going to come up a little short of that. There ain't no reason why we can't go 23-1, so we'll focus on that. That takes getting dialed in on Wake and trying to get this win. As far as when a good time to lose is, to me there isn't ever a good time to lose, but if you do you learn from it and you keep moving. It's all about what's in front of us. That's just the mentality we've had around here for a long time. One bad day isn't going to change that. Let's give Pitt some credit. These guys played their tails off and coached their tails off and they earned it. They deserved to win the ballgame and we didn't. We're 9-1 and going to try to get 10-1.”

He then said it’s good for young people – and his team – to learn that failure is a part of life.

“I don't know anybody that doesn't fail. Kobe Bryant said he'd go 0-for-30 before he'd go 0-for-11. We always have adversity in life. If you won all the time – and it's great to win – you'd lose your appreciation for winning,” Swinney said. “In my opinion, I think God never says oops. It's an opportunity to grow and learn. I don't know any successful person, not one, who hasn't had a lot of failure in their journey. When you're dealing with young people, they have to learn that. They may win all the time on a video game, but life isn't a video game. Life happens for all of us. Sometimes you have bad days. Our guys played their butts off. I didn't do a good job of putting them in a position to win the game. Sometimes when you have adversity, you listen a little bit deeper. Maybe you get that focus you need and more appreciation.”

Losing isn’t something Clemson has had to deal with much over the last two seasons.

"I was messing with my video guy today. He's done 27 consecutive highlight videos for us every Friday night,” Swinney said. “We don't do one unless we win. He's never been a part of anything like that. We lost to Alabama, and he did one before the start of the season, but that’s it. These guys have not had a lot of disappointment. I've got to do a better job of teaching our guys. Our team didn't know they were supposed to stay on the field and do the alma mater. There were only about 8 or 9 guys in the locker room who had ever lost a game at home here. I've got to do a better job of showing them what we need to do if we lose. We just don't put a lot of emphasis on that.”

What are the lessons that can be learned?

"We don't quit. We don't pout and complain. It's what are we going to do about it? Football teaches you to pick yourself up,” he said. “I'm just tickled to death we have to play another game this week. We get a chance to play for a division title this week, a chance to play for a state title and an ACC championship. Our focus is on that. Okay, we won't be 12-0, but why can't we go 11-1? Let's make the best of our situation. It's always an opportunity to teach. Any old fart can handle the good times. A little adversity, you find out what you're made of.”