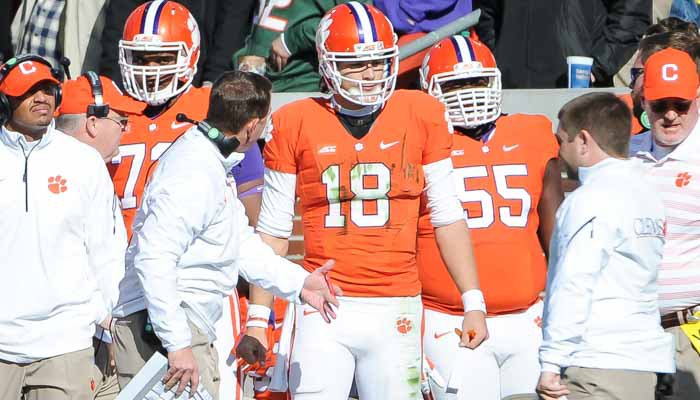 Swinney talks to Stoudt after throwing his third interception of the day.

ATLANTA, GA – No Division I football team should be completely reliant on one player, and the Clemson Tigers fashioned a four-game winning streak without the services of freshman quarterback Deshaun Watson

Watson made his grand return Saturday at Georgia Tech, and as painful as it is to say it has to be said – Clemson had absolutely no shot at winning the game once Watson left with a left knee injury, even though the Tigers were clinging to a 3-0 lead.

DeShawn Williams
Sr. Defensive Tackle
#99 6-1, 292
Central, SC
View Full Profile said after the game, “It really didn’t affect us on the defense too much, but after that pick-six things changed.”

On third down, backup and senior Cole Stoudt

Cole Stoudt
Sr. Quarterback
#18 6-4, 231
Dublin, OH
View Full Profile threw a pass that landed perfectly in the hands of Tech defensive back Jamal Golden and his 85-yard touchdown return would set the tone for the rest of the game as the Tigers wound up with just six points and less than 200 yards of total offense.

Clemson trailed 9-3 at intermission, but Tech put a touchdown on the board on the first drive of the second half. What followed was another Stoudt interception – in the middle of the field – and that was followed by an underthrown ball to Mike Williams

Mike Williams
So. Wide Receiver
#7 6-5, 208
Vance, SC
View Full Profile on the sideline that was returned for yet another Jacket touchdown. Stoudt was done for the day at that point – but it was obvious prior to the interceptions that Clemson’s offense would struggle without Watson.

Watson gained 40 yards on seven carries prior to the injury, and without the threat of a running quarterback Tech was able to sit back and let Stoudt take his shots. The rest is history.

“Things just didn’t really go right today, and sometimes that happens,” Stout said to the media. “We just to move on from it and correct our mistakes. It’s a rough day, but there are things that can be fixed and we just have to get back in the film room this week and work on it.”

“It’s football. Bad things happen,” he said. “You just have to keep on going. I have a great group of guys behind me that are with me and they will make sure I have a level head I do and we just have to make sure it gets better.”

It was obvious that without Watson, Clemson’s offense lacks a true leader or go-to guy and as a result confidence now might be at an all-time low. Senior right tackle Kalon Davis

“We knew after Deshaun went down that we were going to have to run the ball,” Davis said. “But after we ran the screen play that was intercepted, that was when the real scramble started.”

Chad Morris
Offensive Coordinator / QBs
View Full Profile said he was disappointed with his offense but hopes the offense can put it together for the stretch run.

“Any time you lose a guy like Deshaun it’s tough, especially with how much effort he put into getting back and how we were moving the ball,” Morris said. “But it’s not all on Cole. We have to get it together for these guys. At halftime, we told our guys, ‘hey we can’t give it to them.’ But the last five weeks have been a simplification process and now we have to go back and look at that. We just have to put it back together."

Wayne Gallman
RS Fr. Running Back
#9 6-1, 209
Loganville, GA
View Full Profile said that with two games remaining, Stoudt and the offense will have to get its confidence back.

“Through the last four games Cole had been playing extremely well,” Gallman said. “But today I don’t know if it was just the fact the Deshaun was back or what. But that’s something he is going to do for himself and get his mindset right again. In any game, he just can’t let up on us like that. I am behind Cole all the way – he just has to do better.”