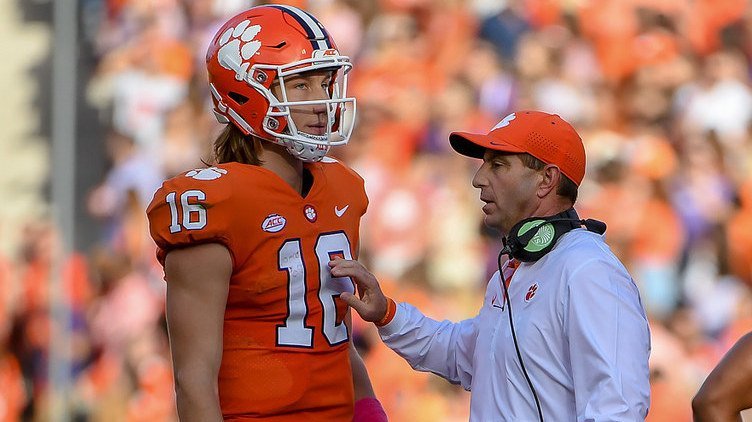 Lawrence talks to Dabo Swinney during the win over Louisville

CLEMSON – Trevor Lawrence has taken the reins of the Clemson offense and led the Tigers to video game point totals over the last month. There was 63 in a win over Wake Forest, 41 in a win over NC State, 59 against Florida St., and 77 against Louisville last weekend.

All of those were done in relatively balmy conditions – especially for this time of year – something that Lawrence is used to after playing his school ball in nearby Cartersville, Ga.

That changes Saturday night when No. 2 Clemson plays at Boston College with the ACC Atlantic Division title on the line. The forecast? Temperatures are likely to dip into the high 30’s by kickoff and drop as the evening progresses.

Lawrence was asked about his first trip to Boston College and the usual harsh conditions, and he admitted playing that far north is something new. How far north has he played?

“Virginia,” Lawrence said. “I played in one game (in high school), it was an away game at the end of the season and I think it was Halloween and it was like, sleeting and 40 degrees. The wind was blowing, raining. It was awful. I’ve never really been to any of these places. Never even been up north, really. So it’s going to be cool to go up there and play.”

The Tigers will play at BC with the season on the line as Clemson can clinch a spot in the ACC title game with a victory. If Boston College pulls off the upset it will control its own destiny in its quest to win the ACC Atlantic.

It will also be the first road night start for Lawrence, but co-offensive coordinator Jeff Scott isn’t worried.

“He’s going to do very well in any new scenario or scene. I promise you he’s looking forward to going up and playing on the road in a very difficult road game versus a very good defense with different weather than he’s had around here,” Scott said. “He’s the kind that’s looking forward to that challenge and will embrace that.

“I expect Trevor to do exactly what he’s done anytime he’s faced something new, which is just embrace it and go be successful. He looks like he’s been out there playing for years. That’s the sign of a special young talent... I haven’t seen anything in him that’s caused me to worry.”

For his part, Lawrence said he likes playing when the lights are brightest.

“I just like playing in big games,” Lawrence said. “It’s fun going on the road and fun to experience these new things. I’ve never really been to any of these places. Never even been up north, really, so it’s going to be cool to go up there and play.”