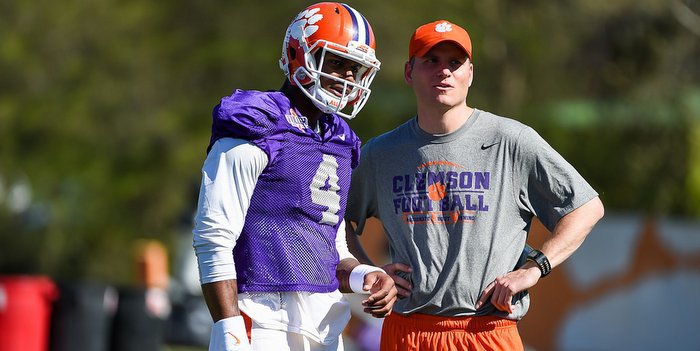 Streeter (right) talks to Watson at a recent practice

“I called him up, and I said, ‘Brandon, I’m about to make your life. You get to coach Deshaun Watson,’” Swinney said last week, reminiscing about offering the job as quarterbacks coach after offensive coordinator Chad Morris left for SMU.

Streeter was the offensive coordinator at Richmond at the time, so he knew about Watson, and when Swinney called and offered the chance to coach one of the nation’s most dynamic players, Streeter jumped at the chance.

Streeter told TigerNet last week that Watson has been better than advertised.

“He's got a great mind and understands the big picture as good or better than anyone I coached before in the quarterback position,” Streeter said. “He gives insight with some of the game planning - I give him an idea of what we're thinking and sometimes he'll say, ‘Well, I saw them do this on the film, and I think we can exploit them with this.’

“He does that every once in a while, not a lot, but enough to give you some good thoughts. He's so good with that picture and understands so much football that the game is slowed down to him tremendously. The more experience he gets, the more it slows down. The best thing with him this past year was just decision making. It was what helped us succeed a lot. He made the right decisions consistently and when he does that there are some pretty good players that he's distributing the ball too, so that helps.”

Streeter said Watson has the autonomy to change plays based off what he sees at the line of scrimmage.

“Not necessarily every play, but there will be a couple of plays in a run game or a couple of plays in the passing game that we give Deshaun the freedom to check into something that would be better for us,” Streeter said. “He sees it so well on the field. I mean, there are guys that see it well in the meeting room, but when you can see it on the field in the midst of all the pressure and all of the game situations, then you have something special.”

Watson put on a performance for the ages against Alabama in the title game in January with 478 total yards against the Crimson Tide. Watson had 20 carries for 73 yards and was 30-of-47 for 405 yards and four touchdowns through the air.

“He had a heck of a game. All year along he stepped up in big situations and kind of made it happen,” Streeter said. “He missed a couple of things in the National Championship game, but when you take the whole game and put it together, it was pretty special what he did. What it showed me, especially at the end of the game, when there was a minute left, there was no giving up. He was like, ‘Hey, I'm marching this team down the field to score the touchdown.’ That showed a lot of things to me that I knew he had, but it just confirmed that this kid has everything that you could possibly want.”

Watson threw an early interception against Alabama, but Streeter said he wasn’t worried about Watson’s mental approach after the turnover.

“Honestly, I wasn't worried. It's happened in other games too and he just bounces back,” he said. “He comes back and learns from it. He's so poised and even-keeled. He learns from it and moves on and doesn't dwell on the past at all. It might have crossed my mind - being the National Championship game - how will he respond? But, he definitely responded in the right way.”