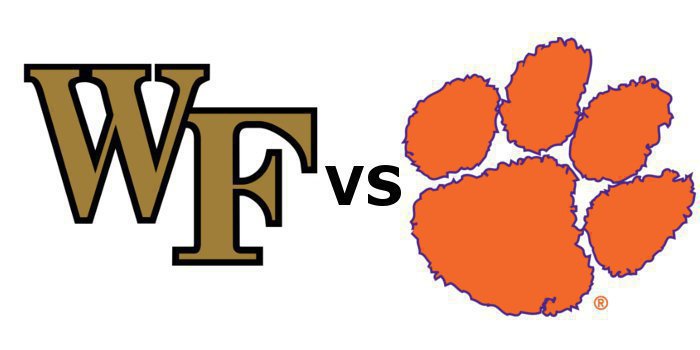 Clemson and Wake Forest kick off at noon

The floats are almost ready on Bowman and the weather this past week has shown a hint of fall with warm, sun-splashed days and cooler nights. The Tigers are flying high after winning at Virginia Tech last weekend, while Wake Forest is wondering how they let Florida St. off the hook.

The early start (noon) for this game is a nod to the fact that the Tigers have a short week next week before playing at Syracuse in one of the ACC’s silly Friday night contests.

Will the Tigers be overlooking Wake? Will the early start put a damper on the festivities?

That’s why they play the games.

Streak: Clemson won 8 in a row

*Clemson owns 64 wins over Wake Forest in history, its second-highest victory total over any opponent. Clemson has 68 wins over South Carolina. Fifty-four of those wins against Wake Forest have taken place since the ACC was formed in 1953.

*Clemson has converted on 49.3 percent of its third downs so far this year, 11th best in the nation and on pace to be the fourth best percentage in Clemson history. Last year’s National Championship team converted 50.2 percent of its third-down opportunities, second best in school history. The record was set in 1978, the first year the Clemson SID office tracked the stat. That year Clemson converted 99 of 192 third downs, a .516 figure. The quarterback on that team was Steve Fuller. One of the reasons for Clemson’s third-down success has been the passing of Kelly Bryant. On third down, Bryant has completed 22 of 37 passes for 339 yards and a touchdown without an interception. He has 19 third-down passes that have resulted in a first down, 11th in the nation.

*With its 31-17 victory over Virginia Tech in Blacksburg, Va., last Saturday, the 2017 Clemson Tigers became the first team to defeat three Associated Press Top 15 teams in the month of September. This was research provided by ESPN immediately following the conclusion of the game. How far back are we talking? You can’t say the history of college football because there weren’t AP polls before 1936. But, since 1936, Clemson is the first to do it.

WHY WAKE FOREST CAN WIN

The Demon Deacons aren’t the pushover they have been in recent seasons. Head coach Dave Clawson finally has all of his players on campus and he has a balanced offense led by quarterback John Wolford, who is fourth in the ACC in passing efficiency with a 152.1 rating. His favorite target is Greg Dortch, who is sixth in the ACC in both receptions and receptions yards, and second in receiving touchdowns with five. Wake Forest is balanced on offense with 192 yards a game rushing and 226 a game passing.

Clemson hasn’t looked sharp in the passing game, so if the Wake Forest front four can affect the run game and force the Tigers into third-and-long – much like Boston College – they can keep it close. Clemson is also coming off a month in which they went 5-0 and beat three ranked teams. Will that same drive be there for a noon kick against a team they’ve beaten convincingly in the past?

Let’s face it, Wake Forest shouldn’t be able to move the ball against this Clemson defense. As good as Wake looked at times last week against a reeling Florida St. team, this is also the same group that struggled to beat App St. two weeks ago.

The Tigers have been especially dominant through three periods when the starters have been on the field. Against Louisville and Virginia Tech, Clemson gave up two touchdowns in each game in the fourth period after the game has been decided. No team has scored more than seven points against Clemson through three periods. The Tigers have given up just two touchdowns over the first three quarters for the first five games. Opponents are averaging just 5.2 points, 9.8 first downs, 72 yards rushing, 99 passing yards and 171 yards per game in total offense through three quarters. Expect more of the same Saturday.

Head coach Dabo Swinney was a man on a mission when he walked into the interview room Tuesday, and he wanted to make sure that everyone knew Wake Forest would not only provide a test for the Tigers but could walk away with a win if his team was complacent. From everything we’ve heard this week, his team got the message. The bottom line is this – Clemson gets the best shot of every team on the schedule, and Saturday will be no different. And while Wake Forest can make things interesting and their defense has a chance to keep Clemson’s offense from running wild, they won’t score enough to keep up. The Tigers will be pushing towards a double-digit lead by halftime and the Homecoming crowd will go away happy.