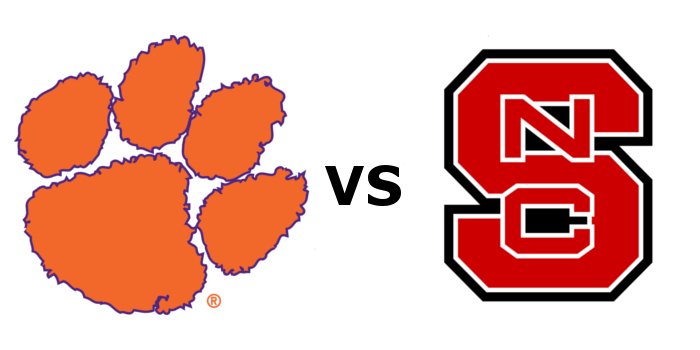 An ACC Atlantic Division title and a spot in the College Football Playoff are on the line for Clemson Saturday. Can they continue their mastery over N.C. State and fly out of Raleigh with a win?

With a victory on Saturday, the Pack would control its own destiny and be one win away from clinching a trip to the ACC Championship Game in Charlotte in December. A Clemson win, however, would give the Tigers tiebreaker privileges with the Tigers having just one conference game remaining, against Florida State.

*Orange shoes – In 1967, Clemson painted its shoes orange for the NC State game in Death Valley and the Tigers upset the 10th ranked Wolfpack, 14-6. Clemson clinched a tie for the ACC championship with the victory 50 years ago. Clemson painted its shoes orange because NC State had featured a defense that had worn White shoes during the season. It was the highest-ranked team Clemson defeated in Death Valley in the Frank Howard era.

*Purple jerseys – In 1991, Clemson wore purple jerseys for the first time since the 1940s in a 29-19 upset victory over NC State. NC State was undefeated and ranked 10th in the nation entering the game against Ken Hatfield’s Tigers. Nelson Welch kicked a then-record five field goals in leading Clemson to the victory. Clemson went on to win the ACC Championship.

*FULL MOON: The last time NC State played a game at Carter-Finley Stadium, there was a full moon. That night, Thursday, Oct. 5, the Wolfpack defeated No. 17 Louisville, 39-25. Since then, the Wolfpack has played a pair of road games with a bye week in between. The moon is scheduled to be full again on Saturday, but with a 3:30 kick most of the game will be played in the daylight.

WHY NC STATE CAN WIN

Sure, revenge is a factor. NC State feels like it should have beaten Clemson last season, but I go back to what a Clemson player once told me – all of that goes out the window when you get hit in the mouth, after that it’s just football.

Eight games into the 2017 campaign, NC State has turned the ball over just four times - the lowest turnover mark in the FBS. The Wolfpack had two miscues in the opener against South Carolina, one against Louisville and another at Notre Dame.

NC State has allowed just nine sacks this season and only eight on quarterback Ryan Finley (the other was when WR Jakobi Meyers attempted a pass against Florida State and was called for intentional grounding). And almost half the sacks allowed came in the first game of the season, as South Carolina had four. So in the seven games since then, the Pack QB has been sacked just four times in seven games. Finley has not been sacked a single time in ACC play. Additionally, NC State’s first four ACC foes have only been credited with three TOTAL quarterback pressures.

NC State is currently starting nine seniors on defense. That’s the biggest group of seniors starting on defense in the nation and no other FBS school is starting more than seven (Penn State, Maryland, and UMass). The Pack’s entire front seven (DL, LB & Nickel) are all seniors, as well as both starting cornerbacks. Overall, the Wolfpack returned 11 senior starters from last season - the highest number of returning senior starters in at least the past 25 years. In addition, two starters from 2015 who sat out last season came back (one of whom - CB Johnathan Alston - is now starting).

Clemson ranks in the top 20 in the nation in defense in 14 different statistical categories. That includes a No. 6 ranking in scoring defense (13.1), seventh in total defense (282) and seventh in pass defense (163). The Tigers are 18th in the fourth major category, rushing defense. The Tigers have been especially dominant through three periods. Against Louisville, Virginia Tech, and Wake Forest Clemson gave up two touchdowns in each game in the fourth period after the game had been decided. The Tigers have given up just 12 touchdowns all year and seven of them were in the fourth quarter of games the Tigers led by at least 20 points.

Clemson is also used to big games. State is 2-1 against ranked teams this season, but both of those teams (FSU and Louisville) are no longer ranked. State hasn’t played a game of this magnitude in a long time, while Clemson has already been on the road at Virginia Tech and Louisville this season. Over the last five seasons, the Tigers have played in College Football Playoff games, two title games, ACC Championships and big games against Top 10 teams on the road. They are used to this.

This has been a hard one for me to figure out. I know Clemson’s defense is good, but the Syracuse game showed some holes that I think NC State can exploit. It’s a home game for the Pack, they have revenge and they want to prove that last week’s loss at Notre Dame was a fluke. Plus, they get all-everything offensive player Nyheim Hines back. A lot of the intangibles point to NC State.

But here’s the kicker – I don’t know if NC State is as good as Virginia Tech, and the Tigers went into Blacksburg and dominated most of the night. Clemson’s game plan each week has been to get up early, ride the defense and the running game to a solid if not spectacular win.

I think NC State will take their shots, and they’ll have some success. But don’t look for this to be a high-scoring affair. Also, it will be interesting to see how the Tigers handle the secondary with both Marcus Edmond and Mark Fields out.

The Pack will hit a big touchdown, kick some field goals and this one will be tight most of the day. But the Tigers find a way to make it happen. A healthy Kelly Bryant and Clemson’s running game will have success, but this might be the coming out party for the Clemson passing attack.