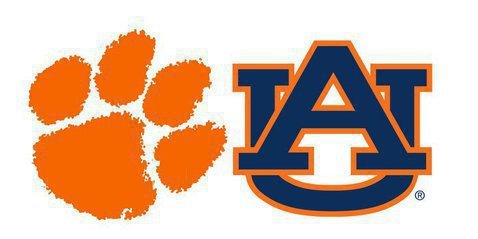 Clemson has won three straight in the series versus Auburn

It’s Clemson and Auburn. ACC vs. SEC. It’s Death Valley under the lights, and it’s two rivals that first met in 1899. The weather should be gorgeous and a national television audience will be tuned in. In other words….this should be fun.

Clemson opened the season with a ho-hum, clinical dissection of Kent St. in a 56-3 laugher last Saturday, while Auburn rolled to a 41-7 decision over Georgia Southern. This is the first real test for either team, and by 10:30 Saturday night we will know a lot more about both squads.

Clemson has won three straight in the series versus Auburn"

*Auburn has a 34-14-2 lead in the series with Clemson, but Clemson has won three in a row, including a 19-13 win at Auburn last year. Clemson’s win at Auburn was its first win there since 1951 and it was Clemson’s first season opening win at a school currently in the SEC since 1903.

*John Heisman was not an Auburn graduate, but he came to Clemson from Auburn. He coached at Auburn from 1895-1899 and came to Clemson to coach the 1900-03 era. Heisman was 12-4-2 at Auburn before coming to Clemson. He was 19-3-2 as head coach of the Tigers for those four years. He then left Clemson to become the head coach at Georgia Tech. His .833 winning percentage is the best in Clemson history. Heisman coached for each school within the first two games of this series. He defeated Clemson for Auburn in 1899 by a 34-0 score, then defeated Auburn as Clemson’s head coach by a 16-0 score in 1902.

TALE OF THE TAPE

Why Auburn can win

Ok, hold onto your hat, but……..Kevin Steele’s defenses have been better since he left Clemson. Clemson fans, of course, remember Steele’s defense at Clemson. They couldn’t stop a spread team, and they couldn’t stop a running quarterback. His LSU defense finished 25th nationally in total defense in 2015, and last season Auburn ranked seventh nationally in scoring defense, 11th in red zone defense and 28th in total defense his first season, an improvement of 43 spots over the previous season (under Will Muschamp), and held eight consecutive opponents without a rushing TD, the longest season streak at Auburn since 1957.

There is also a lot of unknown with Auburn’s offense. Gus Malzahn hired Chip Lindsey to run the offense, and Lindsey has exactly one season in that role (last season at Arizona St.). With new quarterback Jarrett Stidham on board, many expected the offense to look different under Lindsey, but last week looked much like any other Malzahn offense. Perhaps they went simple in an effort to not tip their hand to Brent Venables. If so, Venables will have to adjust on the fly.

Finally – we are just not sure who can be trusted to make a play in crunch time for the Clemson offense. All of the great players (except Hunter Renfrow) who won so many close games are gone – how will this group react if they have to convert a 4th-and-11 with under two minutes to play?

Why Clemson can win

Over the last seven seasons (including 2017), Clemson is 40-3 at Memorial Stadium. Dabo Swinney is 53-7 at home since he became head coach in the middle of the 2008 season, and the Tigers are hard to beat at night under the lights. Clemson has a homefield advantage unlike any other in college football, and it will be on full display Saturday night.

Many of the national pundits are pointing to the fact that Auburn almost beat Clemson last season and wants revenge as a motivating factor. That’s great – but these Clemson players feel like they should have blown Auburn out last season, and there is motivation on this side to come out and make an early-season statement. Of course, one former player told me that being fired up and motivated is great until the first play, and then you get hit in the mouth and it’s just football. So…

This is going to be a fistfight. Hard-hitting. Physical. Turnovers, as always, will be critical. Special teams will play a part. The teams will knock each other around for three quarters – both will establish the run game and take chances with downfield throws in the passing game. It will be tight and it will be intense. But those lines – where Clemson has the advantage – will begin to tell the tale in the fourth quarter, and Clemson will make a big play that turns the tide as Auburn starts to wear down.