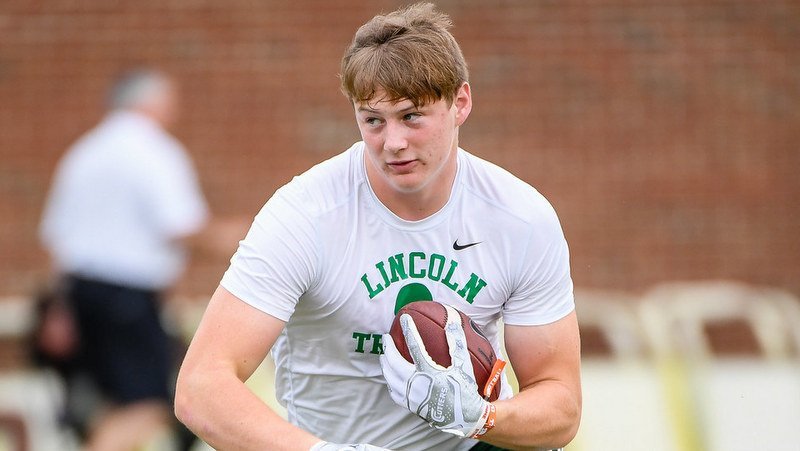 Ennis goes for the ball at camp Wednesday

Sage Ennis made the most of his one workout.

The 2020 3-star tight end out of Tallahassee (FL) Lincoln stopped in Clemson Wednesday and worked out in one of the sessions of head coach Dabo Swinney’s high school camp. During the 1-on-1 part of the session, Ennis made a nice one-handed grab. That grab was just a small part of an impressive showing that ended with a Clemson offer.

“It was a surprise. I kinda knew that if I came back up to camp I had a shot at it, but it really came out of nowhere,” Ennis told TigerNet. “It was Coach Swinney that gave me the offer. We had just finished 1-on-1's and they were breaking for lunch after the first practice and he came up to me and told me I had an offer.”

Ennis reached out to the Clemson staff a few weeks ago and made a stop on campus after visiting NC State. It was on that visit that he began to develop a relationship with tight ends coach Danny Pearman, who told Ennis he needed to come back for camp if he wanted an offer.

Mission accomplished, and now Ennis has a lot to think about as he nears a decision.

“It does change things. They are a top-tier school,” Ennis said. “I already had a list narrowed down, but with them offering they will now go on the list and they are one of the few schools I have in the top of that list. I liked working with Coach Pearman. I can see how he coaches and see what he does. I like him as a coach and as a person.”

Ennis will make an East Coast recruiting trip with his high school from June 10-16 and once he gets home he should have an idea of where he wants to go. 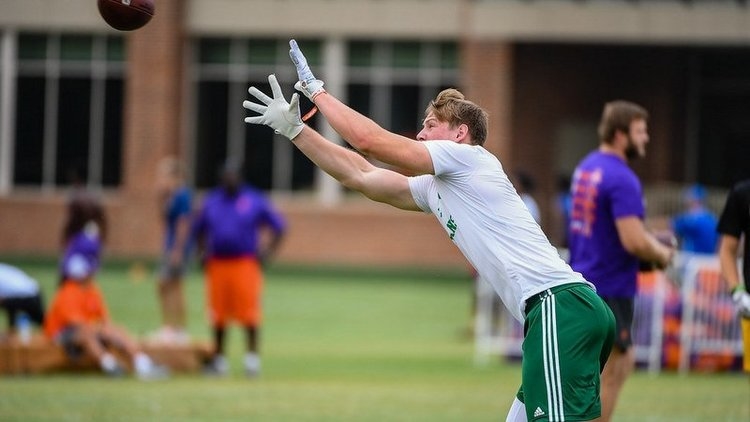 Ennis goes for the ball at camp Wednesday "

“I am about to go on a recruiting trip with my high school team. Our coach is taking us on a big recruiting trip,” Ennis said. “We are going to go up the East Coast. We are going to Maryland, Virginia, West Virginia, Ohio St., Penn St., Kentucky, North Carolina, Louisville, and some other schools. After that, that will be it visiting wise.

“I will make a decision as soon as I get back from that trip.”

Clemson has given Ennis a lot to think about.

“There is an atmosphere around the program that makes you feel like home,” he said. “All of the players and coaches there are so cool and calm and nice. Everybody preaches family but not everybody puts that into action. They do.”

Ennis said he loves to catch the ball, but it’s the blocking part of playing tight end that he really loves.

“It's always great catching the ball, but when you can get down and nitty gritty and help out your teammates, that is always fun, too,” Ennis said. “Plus, you get to dominate and smash somebody.”