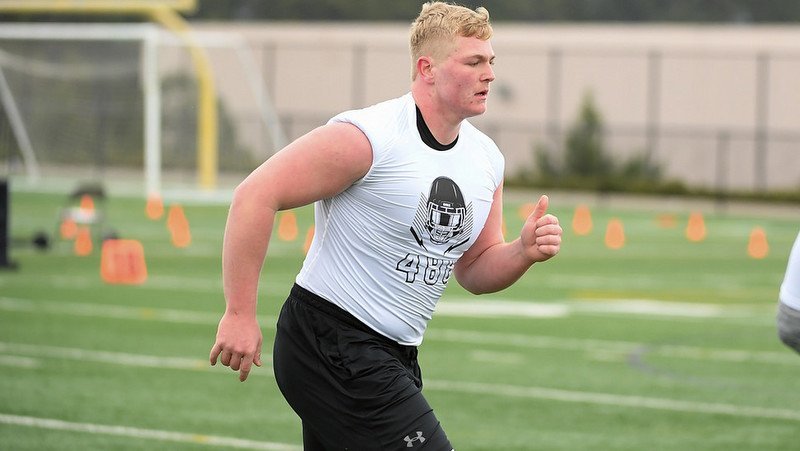 Miller works out at The Opening Atlanta

BUFORD, GA - The competition between Ohio St. and Clemson doesn’t stop at the football field, it begins with the players, even before they reach their final destination.

Clemson has recently battled to win over the heart of Harry Miller and bring him home to Clemson.

Miller, a Buford (GA) native, weighs in at 6-4, 310 pounds and is the No. 63 overall prospect and second-ranked center according to 247 sports. Miller has racked up an impressive 29 offers including Ohio State, Stanford, Georgia, and Clemson.

Miller sat down with TigerNet to discuss what keeps Clemson in his top five, where he sees himself on the team and his love for competition. He recently attended the Opening Atlanta Regional, where he went up against some of the biggest recruits in college football. He also did his share of talking.

“It was good, I like going against those guys,” Miller said. “The talking makes it fun, it was good to go against good competition and play with those guys and see guys that you’ve been hearing about and seeing on Twitter since the 8th grade. You only see each other at camps and stuff, so it was really fun.”

Miller was also awarded the MVP honor during his time in Atlanta.

Miller works out at The Opening Atlanta "

“It was very exciting and good to know,” he said. “It was a big deal for me just because of the competition we had today, not only competing against d-linemen but showing up against O-linemen, and just trying to prove your worth and build a brand.”

Although Miller has an impressive 29 offers from schools all around the country, Clemson has remained in his top five.

“I just love the coaches. They are amazing, you know it's successful, it’s close, and again the coaches are probably one of the biggest things. We just love to go there and see them,” Miller said.

“I talked with coach (Robbie) Caldwell a lot, and coach (Tony) Elliott. We just talk about spring practice and getting sorted. They were on vacation, so we were just talking a little bit DM’ing and texting, and just seeing what’s going on,” he said.

Clemson is not the only school staying in touch, however.

“Ohio State shows a lot of interest, and they’re always staying in contact," Miller said. "It was a big thing for Stanford to offer because of the distance and them not offering a lot of guys. With Notre Dame and Clemson, it’s about the pursuit and how they remain. It’s why those schools made the top five. If I go there, they’ll want to invest in me and make me better.”

According to Miller, most schools see him at tackle-guard and center, but he is ready to go wherever he is needed.

“Last year I played at tackle-guard and center, probably interior at the next level, but they see me playing where they need me to,” he said.

Miller plans on visiting Clemson on May 19th and expects to see the Clemson and coaches he has grown to love.

“I think we have a visit in May and I think that'll be the next time,” Miller said. “I mean really we’ve been so many times we’ve seen everything. So, it’s really about just seeing the coaches again and talking with them, and continuing to build the relationship.”

Miller also has plans to visit Ohio St. and Stanford in the near future, but his decision will not be coming any time soon.

“I think we’re visiting Stanford in two weeks, Ohio St. in three and then Clemson in May. I don’t know when I'll make a decision, just have to talk to schools and be patient with it,” according to Miller.