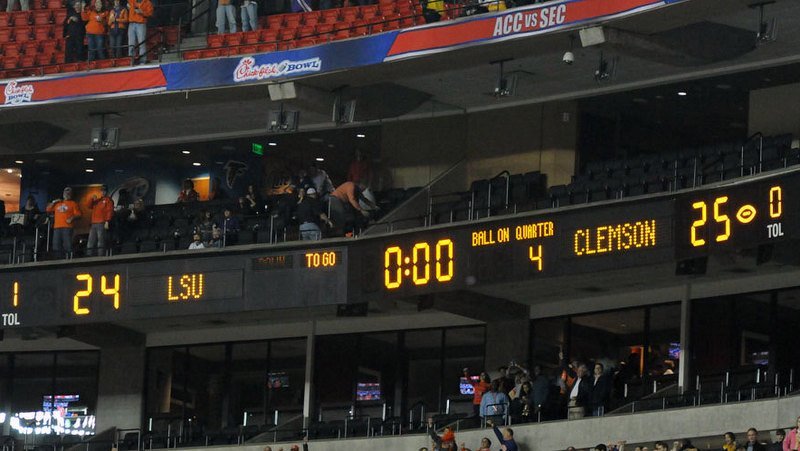 Clemson and LSU faced each other in 2012

CLEMSON – Which school has the real Death Valley? Clemson and LSU might be able to settle that on the field.

Clemson Athletic Director Dan Radakovich told the media Friday that he and Assistant AD Kyle Young are working on future series with both LSU and Georgia.

"It'd be great. You can look at our past history. That's kind of what we do," Radakovich said. "Football scheduling is like a cake that never bakes. It just kind of goes on and on, and we're trying to get our schedule taken care of through the decade of the 20s. We're close, but we will get that news out as soon as it is done. We are still having conversations with those two you mentioned and others as well.”

Clemson and Georgia is a natural fit. The campuses are 75 miles apart and there are large numbers of each fan base living in enemy territory. The schools go head-to-head on the recruiting trail, but last met on the field in 2014. Georgia holds a 42-18-4 lead in the series, including wins in six of the last seven meetings.

A potential matchup against LSU is intriguing. Clemson has faced LSU three times but never in Clemson or Baton Rouge. LSU won the first two meetings— in New Orleans at the 1959 Sugar Bowl and in Atlanta at the 1996 Peach Bowl. Clemson won the most recent meeting, a one-point victory in Atlanta at the 2012 Chick-fil-A Bowl.

Radakovich stated that he preferred a home-and-home series with both schools, as opposed to a neutral site game like the Chick-fil-A Kickoff in Atlanta, setting up a potential trip to LSU and the other Death Valley, which is also known as Deaf Valley.

“Believe me, there is nothing more I would like to do, and Kyle Young in our office who works on football scheduling, than to get that out,” Radakovich said. “Football scheduling takes a lot of different twist and turns. We have our rival game with the University of South Carolina, but we also have looked into playing another Southeastern Conference opponent each and every year, Auburn, Georgia, Texas A&M obviously the next two years.

“The ACC is a little different because we are sprinkling in Notre Dame as an opponent as well, so we have to be mindful of that.”

He then said that he is always looking to improve future schedules.

"It's just keeping in contact with people and trying to see if dates work," Radakovich said. "Many athletic directors, when they see one another, if there is an interest in playing, they'll say, 'Hey, you got anything open?' "You just always have to have that conversation. It's almost part of the standard greeting. You always have to have that conversation, not knowing if something happened on their campus that maybe changed something on their schedule.”

Radakovich said he is also looking for matchups that make sense.

“That is one of the things, through our ability with relationships, to create really good games in maybe games that make sense for us,” Radakovich said. “Playing games like Auburn and teams like Georgia, and other Southeastern Conference schools, are geographically positive for us and we want to be able to do that.”