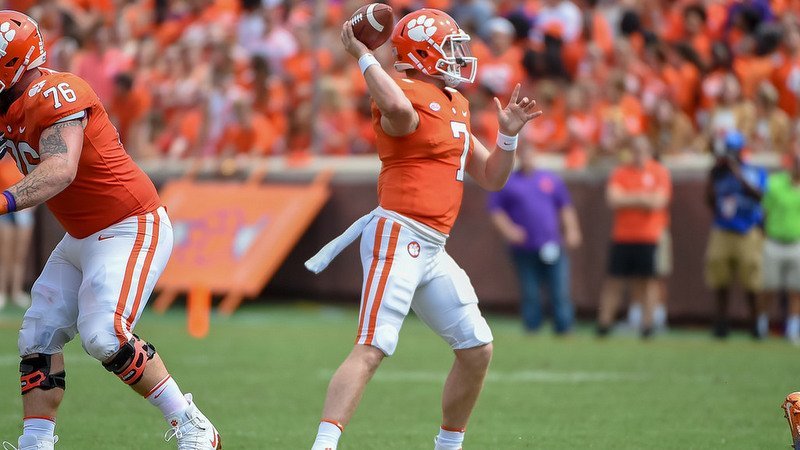 Chase Brice stepped when his teammates needed him most

CLEMSON - The departure of Kelly Bryant left the Clemson quarterback room thin. People around the nation were wondering what the Tigers would do if star quarterback Trevor Lawrence got injured, and Saturday we figured out.

Lawrence went down with a head injury in the first half, leaving the offense in the hands of redshirt freshman Chase Brice.

“I was prepared. When I went in, everyone just rallied around me. It is amazing what you can do when people say they believe in you,” Brice said.

Brice had played minimal snaps this year before the Tigers showdown against the Syracuse Orange. Most of his playing time came at the end of games when Clemson was leading by more than 20 points, which is usually when coach Swinney puts in the backups. Saturday was a whole new story for the new second string QB, who entered the game when the Tigers were losing 16-7.

The offense struggled for most of the game and it seemed Clemson was on the verge of another upset loss. But Brice made two crucial plays in the fourth quarter that helped lift the No. 3 Clemson Tigers over Syracuse.

The first play was on 4th-and-6 with about two minutes left to go in the game. Brice dropped back and threw a perfectly placed ball to wide receiver Tee Higgins which kept Clemson in business.

“(The offensive line) created a perfect pocket for me and all I had to do was deliver the ball to Tee and he would do the rest,” Brice said.

Another key play was Brice’s run, which looked almost similar to Travis Etienne. Brice refused to go down on his way to a 17-yard gain to set up the Tigers in the red zone.

Those two plays were just a part of Clemson’s 94-yard touchdown drive, which lifted them to victory. Brice was confident that his offense could drive the ball downfield and put the Tigers ahead and they did just that.

“(We just had) to keep on doing what we were doing in the second half,” Brice said. “We were gashing them running the ball and they couldn’t stop it. (The coaches) trusted in me to make some plays. We just ran it down their throats and made a couple plays.”

While the status of Lawrence is up in the air, the Tigers now know they have a backup who can get the job done in Brice. Today he showed the toughness needed to lead this team to more success.

This was a huge team win for Clemson. It will be interesting to see how this win translates to next week on the road against Wake Forest.