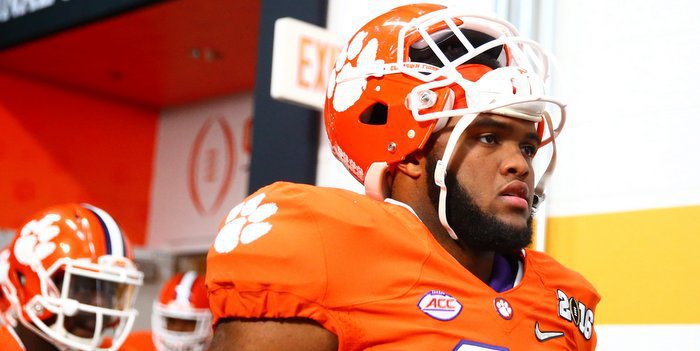 CLEMSON – Austin Bryant hopes to be hitting his stride about the same time his team hits its stride.

Clemson’s sophomore defensive end made his season debut last weekend against NC State, and he contributed a sack in the winning effort. Bryant’s return to the defensive end rotation gives defensive coordinator Brent Venables more depth at the position, and Venables said Bryant will earn more playing time each week.

"He’ll continue to get back into that and that takes a little bit of time, but I thought he was solid out there today," Venables said. "He’s a very mature kid and he’s worked really hard to get back and we trust him."

Bryant missed Clemson’s first six games of the year after fracturing the fifth metatarsal in his right foot during an August practice. Clemson head coach Dabo Swinney said then that Bryant might be able to return for the Georgia Tech game in late September, but Bryant wasn’t fully healed enough to play until mid-October.

"Because of my position, I do a lot of radical movements: cutting, bursting," Bryant said. "I just wasn’t ready to play yet. Missing time like that is tough, it was hard missing those games but I was never down and I was able to get healthy and come back and play.”

Bryant recorded just one tackle in his return, but it was a fourth quarter sack of NC State quarterback Ryan Finley.

"That’s what you come to Clemson for, to play defensive end here and sack people, so it was a nice way to kick off my sophomore season," Bryant said. “Today felt really good. It was good to get back into the flow of things.”

Bryant hopes to get better each week.

“This is essentially my first game of the season. Other guys have had time to hit their stride, and I'm just starting mine,” he said. “I just want to keep improving each week in practice and in the games. I have to get back to my fluid movements as a defensive end, being explosive, quick and fast while being strong at the same time. That will come with time and me getting more confidence.”

Bryant said he feels like he’s in good football shape, and will be in even better shape when Clemson plays at Florida St. next weekend.

“I was actually surprised I was in as good of a shape as I was. Danny (Poole) did a great job of keeping me in shape while I was hurt,” he said. “I was pleased with how I handled the longer drives. I was never really tired or really gassed. I feel like I’ll be ready to roll (against FSU). Our training staff has done a great job helping me rehab. I couldn’t be more proud and more thankful of our training staff and our coaching staff for taking their time with me. I am still not there yet but I am getting closer.”

Following Bryant’s injury, defensive tackle Christian Wilkins moved to out to end and has done a more than credible job, leading the team in sacks. Bryant understands he might be a role player for the next few weeks, or he might be a starter if Wilkins transitions back to tackle.

He said he doesn’t care either way because he just wants to be there for his teammates.

“I just want to be a guy that the defense can count on to make plays as needed," Bryant said. "Just be there for my teammates, help my team and be a leader for the defense."