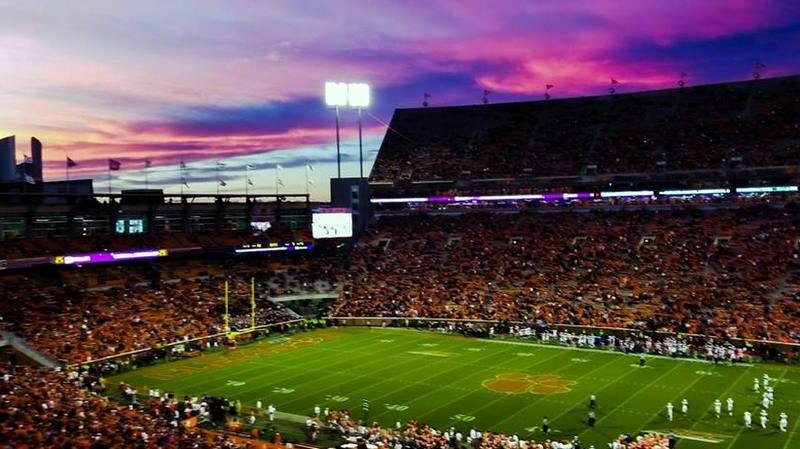 Death Valley is a beautiful place at night.

The closer we get to kickoff, the more hopeful I get. And thankful that Clemson isn’t in the Big Ten.

I’ve said all along that I was hopeful there would be some sort of season. For people who have asked me over the past two months, I’ve used that word a lot – hopeful. Because that’s what it came down to in a world where things seemingly changed hour by hour and minute by minute.

I had people reach out on social media and by email and tell me I was crazy, that there wouldn’t be a season, and I would read each one thinking that there was a person who was trying to insulate themselves from the grief later on if it really happened.

But, the students are back on campus even though most of the classes are still in an online setting. Fall camp is over and the Tigers took a long weekend to rest bodies and minds, and preparation will begin this week for the Sept. 12th opener at Wake Forest. That is 19 days away. That is still a long way to go, but I am more hopeful than ever.

As for the thankful part – I had a friend who covers the Big Ten text me early on in this mess and tell me that he thought commissioner Kevin Warren was in over his head. The league announced a conference-only schedule on August 5th, and then five days later canceled fall sports. It was a bit of stunning turnaround, and there were rumors that the Big Ten was hoping the rest of the Power Five conferences would follow their lead.

Of course, the SEC will follow no one’s lead, which should have been known to anyone that covers the sport. The ACC and commissioner John Swofford held off on making a decision until they had a mountain of medical data and then announced a plan to play.

National media and others have since spread rumors and written stories in an effort to force the leagues in another direction, but they’ve held steadfast, something that Swofford mentioned in an interview with Mark Packer and Wes Durham. Swofford said the ACC had planned on there being outbreaks on college campuses as the students returned to campus, and those same schools moving to a virtual learning process did nothing to change the ACC’s plans to play football.

The Big 12 followed the lead of the ACC and the SEC, while the Pac-12 followed the Big Ten. Warren presented a united front when the season was canceled, but that has all since unraveled. Players’ parents are protesting and the league’s athletic directors were seemingly in unison in wanting to play this but were ignored by Warren.

In other words, the Big Ten is a flaming mess and there is no end in sight to that disaster.

As for Clemson, there is still that hope that a season is played. The roster is loaded, has a nice blend of youth and experience, and the offense promises to be explosive. The defense will once again feature a dominant defensive line. There is plenty of reason for optimism.

Late last week was one of those days that gives us the promise of fall. In Clemson, the temp was in the mid-70’s and it was overcast and the reprieve from the heat was a welcome change. I drove to campus and the students were out walking, laughing, and Bowman Field was full of students playing all manner of games or simply relaxing. College Avenue looked, for the most part, like it normally does.

In fact, it all seemed rather normal in a time that’s not normal. But it gave me further hope we will see football this fall.