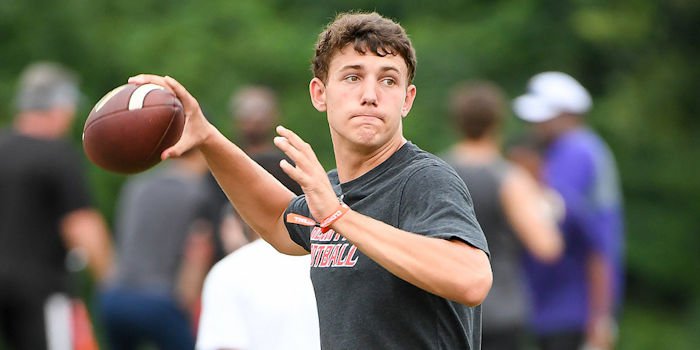 Paul Tyson completed a busy month of June on the camp circuit, and now he hopes he’s shown enough to start reeling in the offers.

The rising junior quarterback from Hewitt-Trussville High in Trussville, Ala., made a string of camp stops this month that included Clemson, Kentucky, Notre Dame, South Carolina and Tennessee. He was in Clemson in early June, spending two days at Dabo Swinney’s high school camp after making a stop in Clemson for a junior day earlier in the spring.

“It went good. It was a lot of fun just getting out there and getting to compete and seeing the facilities and the coaches again,” Tyson said, “I was there for two days, and it kind of seemed to the same. Just getting to see all of the facilities, they really seem nice. Everything just seemed normal since the last time I was up there since it wasn’t that long ago.”

Being on campus for two days allowed Tyson the opportunity to get coached by quarterbacks coach Brandon Streeter.

“That was a lot of fun especially getting to see the way he coached because that means a lot to me,” he said. “Just being able to spend time with him is always great and getting to learn more about him. I just really like that he cares about his players. He’s always honest and cares about all of the quarterbacks no matter where they stand.”

Tyson is known by many as the great-grandson of former legendary Alabama coach, Paul “Bear” Bryant, but his summer workouts are drawing interest from across the region. Tyson threw for 1,110 yards and nine touchdowns through seven games as a sophomore at Mountain Brook (Ala.) before transferring to Hewitt-Trussville, and followed that with 263 yards and three touchdowns in his team’s spring game last month.

Is a Clemson offer on the table? He hopes so, because he considers Clemson to be one of this top schools.

“Mainly, they just want to see how next season - my junior season - goes and they’ll go from there,” he said. “I love the campus and it’s always going to be up there. It’s just a really nice place and they have a really great coaching staff. It would always be up there in my opinion.”

As July heads into August, Tyson said he will spend time getting ready for his junior season.