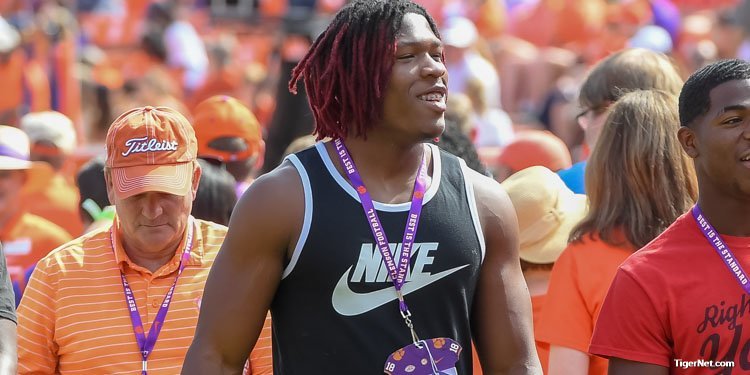 Crouch will be back on Clemson's campus this weekend

One of the Tigers’ top remaining targets for the 2019 recruiting cycle will be in town for Saturday’s matchup against NC State.

Athlete Quavaris Crouch(6-3 222) is a 5-star out of Charlotte (NC) Harding who is still one of the nation’s top prospects despite playing just one game this season. In 2017, Crouch rushed for 3246 yards and 33 touchdowns and totaled 51 tackles and 14 sacks, but a high ankle sprain ended his senior season. That hasn’t kept Crouch off of the recruiting trail - last Saturday Crouch was in Columbia to see the Gamecocks lose to Texas A&M.

"Everything was good. I was mainly was there to see my lineman that played for me last year, Jovaughn Gwyn. I wanted to go see him," Crouch said. "It wasn't a lot of recruiting in it. I talked to Coach Muschamp and Bentley and all them. I got a good relationship with everybody on the staff. It was pretty fun."

Crouch said South Carolina head coach Will Muschamp had a simple message for him.

"Come somewhere where you can be the first, not the second, you know, where we could start something, he said."

Crouch will likely play on the defensive side of the ball on the collegiate level – at linebacker – a decision he says is best for his long-term future.

"For me, I think it's a business decision I'm making, more longevity," Crouch said. "I think it sets me up for the goal I'm having. I'm not saying I won't ever run the ball again, I'm just saying I think I want to play linebacker. I do want to hop on the other side sometime. Some colleges tell me I can do both, have a package at running back. But it may be the other way around. You won't never know until you get to school and find out I'm not as good as I thought I was going to be at this. I know I'm a good running back.

“I feel like at that position (linebacker) I'm kind of flexible because I'm big enough to play inside but I'm fast enough to get around the edge. It's just kind of what their scheme is and how they want to handle it and then you go from there."

Things ramp up this weekend for Crouch, who will be a part of a huge recruiting weekend for the Clemson coaches, a weekend that includes another 5-star prospect in quarterback DJ Uiagelelei.

"Coach Venables is one of the smart defensive coordinators, he does a good job every year," said Crouch. "I feel like they use their linebackers pretty good."

Other official visits for Crouch include a trip to Michigan on November 3rd for the Penn State game, to Clemson November 17th for the Duke game and to Alabama December 7th. He's also planning officials to Southern Cal and Florida State.

"I would say Michigan is number one, but the weather is crazy," Crouch said. "I feel like Michigan and Clemson are tied for number one.”