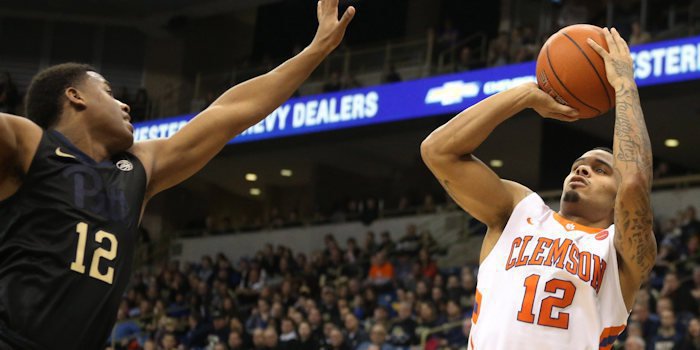 Avry Holmes shoots in the first half at Pitt (Photo by Charles LeClaire, USA Today)

The Tigers moved out of last place and might have saved their chances for the NCAA Tournament.

Clemson used a 12-0 run to start the second half and broke a six-game losing streak in defeating Pitt 67-60 Saturday afternoon at the Petersen Events Center.

Jaron Blossomgame was stellar in the win, scoring 25 points on 10-of-14 shooting, including 4-of-6 from beyond the arc. Shelton Mitchell added 12 and Marcquise Reed 10 as the only other Tigers in double figures. Donte Grantham had just six points but added eight rebounds, while Blossomgame grabbed seven boards.

Clemson shot 51.9% from the field (27-52) and outrebounded Pitt 36-34. Clemson committed nine turnovers while Pitt had seven.

Pitt and Clemson were tied for last place in the ACC, but the Tigers improve to 12-8 and 2-6 in the ACC. Pitt falls to 12-9 and 1-7. The Panthers now have a seven game losing streak. Clemson has won three straight in the series after starting 0-3 against the Panthers.

Pitt was just 5-of-27 from the field in the second half.

Blossomgame scored his 1500th career point in the contest, becoming the 11th player in Clemson history with 1,500 over a career. He has posted 20 or more points in six of the Tigers' last seven games. He is also 9-of-15 from beyond the arc in the last three games.

“All week we wanted to focus on there is a lot of basketball left to play,” Blossomgame said. “Coach really wanted us to focus in on the defensive end. Coming into the game we were one of the worst defensive teams in the conference and that is not our identity. Our main goal was to get back to our identity playing basketball.

“I'm the leader of this team and guys want to see me come in and play well in an environment like this and guys feed off that energy and guys play well.”

Clemson trailed 36-31 at halftime, but Blossomgame nailed a 3-pointer just 45 seconds into the second half to start the run. An offensive rebound by Grantham led to a layup from Shelton Mitchell that tied the score at 36-36.

The teams battled back and forth for much of the first half, but Pitt’s Jamel Artis hit a 3-pointer in the waning seconds for the 36-31 lead at the break.

Michael Young trimmed Clemson’s lead to 64-60 with a jumper with 1:55 to play, but the Panthers failed to score any more points and Reed scored the Tigers’ final three points to seal with win.

The Tigers return to action next Wednesday, hosting Georgia Tech in Littlejohn Coliseum at 7 p.m.

Clemson vs, Pitt boxscore
Get the latest Clemson gear right here!
Comment on this story