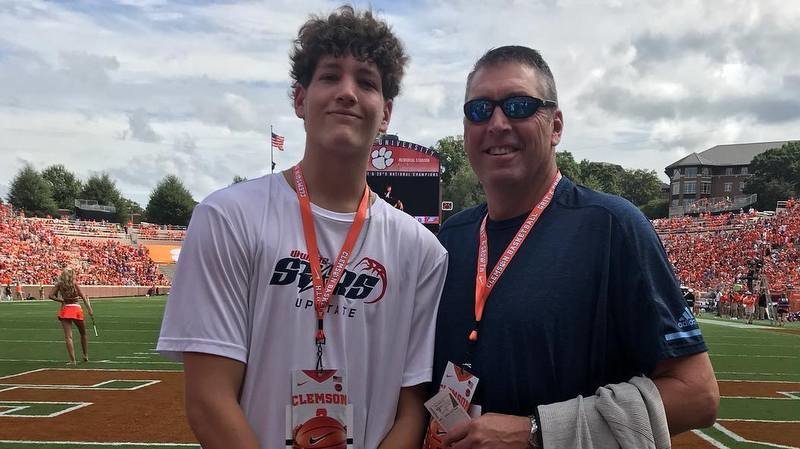 Hall (left) poses with his dad Saturday in Death Valley

Clemson basketball played host to the No. 1 prospect in the state of South Carolina for 2020 this past weekend.

Head basketball coach Brad Brownell and his staff had 2020 power forward prospect P.J. Hall out of Roebeck (SC) Dorman on campus for an unofficial visit.

"It was fun, I got to watch the practice and got to watch them go up and down a little bit, too," Hall said. "I was watching how they would feed the post and all the footwork they were working on for individual work."

Hall also got some individual time with head coach Brad Brownell and learned more about what he has planned for him should he decide to join him.

"He was telling me like where I would stand whenever I came in, not playing wise time but how many post players there would be," he said. "If I were to get there, there would be three already there, so I would be in a good situation my sophomore year because they would all be seniors my freshman year."

"I like him a lot and I like his system, too," Hall continued. "They have some stretch forwards that can shoot the ball and handle a little bit and that's where I feel like I fit in the best. He said once I continue to work on my handling and stuff like that, if I were to play the five and then stretched out to the perimeter, they can't guard that far in college. That would be a big thing for them."

Hall also visited South Carolina for the Georgia game. He attended practice that morning before heading over the Williams-Brice Stadium. He and Gamecock head coach Frank Martin got the chance to discuss future plans should he go that way.

"He was talking about how I fit in there and just the atmosphere of the place," he said. "He talked about what the school is like and if I were to end up there everyone would know who I was and it would be a really great place."

"I know they like to play thru the post, they play inside-out, which I like," Hall said. "A lot of people are getting away from that now. If I ended up there, I know I'd have a great role."

Hall also has been to Florida and he will visit Georgia for a practice and a football game on September 29th. He's expecting South Carolina, Clemson, Stanford, Florida and Tennessee to be by his school soon. The College of Charleston and South Florida have been in to visit already.

Hall said there are no favorites yet and he wants to make his decision next year around his AAU season.