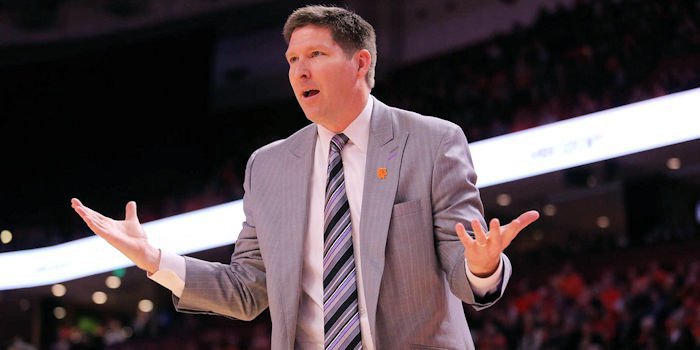 CLEMSON – The Brad Brownell era at Clemson will continue.

The embattled men’s basketball coach for the Tigers met with Athletic Director Dan Radakovich Saturday morning, and Radakovich told TigerNet before the meeting, “I want Brad to succeed.”

Radakovich released a statement to the media:

"As part of a comprehensive season-ending review and evaluation, I met for several hours with Brad Brownell to review the recently completed season and to look ahead to 2017-2018," Radakovich said. "Both of us believe strongly that we should have achieved more this season and Brad is candid with his own critique and assessment. As we move forward, I expect Brad to make changes in the program to better position us for success. He continues to represent Clemson University with integrity and class, and we will continue to do all that we can to help him as we expect to achieve consistent success with our men's basketball program."

Clemson finished the season with a 17-16 record. The Tigers blew a 20-point second-half lead, and Oakland outscored the Tigers 45-20 over the final 17:36 last week as the seventh-seeded Grizzlies defeated Clemson 74-69 in the first round of the National Invitation Tournament in Littlejohn Coliseum.

The Tigers began the season with a strong start in non-conference play, but then came a brutal run of losses in close games. The Tigers were 4-12 in games decided by six points or less. Over the last two seasons, they are 7-20 in those games. Over Brownell's tenure, they are 26-58 in those games.

A former player at DePauw University in Indiana, Brownell arrived at Clemson in April of 2010 by way of Wright State — in Ohio — and UNC-Wilmington first. At UNC-Wilmington, he went 83-40 from 2002 until 2006 and was named the CAA Coach of the Year twice. He then left for Wright State, where he accumulated an 84-45 record with the Raiders and earned the league’s top coaching honor once.

Clemson made the NCAA Tournament his first year on the job and won the program's first tournament victory in 14 years. Statistically, Brownell is now tied with Cliff Ellis for the most wins against ACC programs as the Tigers’ head coach, but the elephant in the room is the postseason. The Tigers have failed to earn a berth into the big dance since 2011, the longest NCAA drought by a Clemson men’s basketball coach since Bobby Roberts endured a similar skid from 1963-70.

Brownell has three years remaining on his contract and would be owed a $3.5 million buyout if Clemson were to fire him at the end of this season. If Radakovich decided to terminate Brownell (124-102 at Clemson) in either of his final two seasons, the buyout would drop to $3 million.