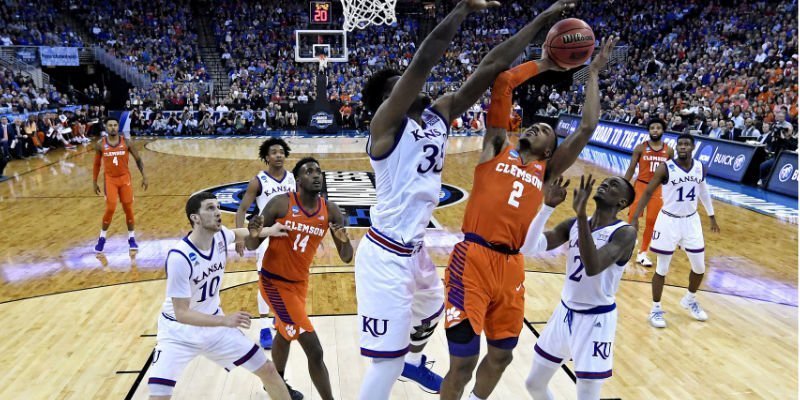 OMAHA, NE –The miracle comeback fell just short and denied Clemson a berth in the Elite Eight for the first time since 1980 and only the second time in school history.

Kansas used a 17-5 run late in the first half and held off a frantic comeback late in the second half by the Tigers in defeating Clemson 80-76 in the Midwest Regional of the NCAA Tournament at the CenturyLink Center in Omaha Friday night.

Gabe DeVoe set a career-high in his final game, scoring a game-high 31 points. Marcquise Reed scored 13 before fouling out late and Shelton Mitchell added 12. The 31 points was a tournament-high for a Clemson player, eclipsing the 26 points scored by Dale Davis against LaSalle in 1990.

DeVoe said he felt like he left it all on the court.

"Yeah, I thought I did. I just tried in any way possible to give my team a chance to win at the end," DeVoe said. "Really tried to rally the guys in the first half when we got down, just continued to fight. Made some big stops down the stretch, gave us a chance but we just weren't able to get over the hump."

Clemson’s season ends with a school-record 25 wins (25-9) while Kansas improves to 30-7 and advances to play the winner of the nightcap between Duke and Syracuse. That game will be played Sunday.

"First of all, congratulate Kansas," head coach Brad Brownell said. "I thought they were really ready to play and just had a really good gear today. I thought their tempo was great and probably caused us not to play our best game. We just seemed a little bit out of sorts, struggled on the glass early, and I think that was a big problem. And then for whatever reason, maybe a little bit of nerves, I don't know, but we turned the ball over. And you're going to struggle when you don't rebound well and you turn it over on offense.

"I thought that was a big factor in the game. And then I thought couple of the Kansas kids were very opportunistic in shooting."

Clemson trailed by 13 at intermission and got a quick bucket from Marcquise Reed to start the second half, but Kansas reeled off three consecutive 3-pointers to extend the lead to 20 at 49-29, forcing head coach Brad Brownell to call a timeout. The Tigers never recovered.

The Tigers played the Jayhawks tough early in the first half, with DeVoe and Mark Donnal leading the way with outside shots. Twice Clemson pulled to within one point, once at 11-10 and again at 18-17 after a jumper by DeVoe at the 9:17 mark of the first half.

The Tigers then began a stretch of unforced turnovers and a failure to block out on rebounds, allowing Kansas to go on a 17-5 run over eight minutes. A thunderous dunk by Lagerald Vick put Kansas ahead 35-22at the 2:17 mark. DeVoe added three points on free throws and Reed drove down the lane for a layup with just over a minute left that made it 35-27, and it appeared the Tigers might make a final push in the half.

However, Elijah Thomas was called for a flagrant foul on the scoring play and Kansas hit both free throws and a 3-pointer by Vick with half a minute left to take a 40-27 lead into intermission.

"You know, we weren't playing very well, but at seven minutes to go in the first half, I think it was a two-point game, and obviously we didn't close the half well," Brownell said. "It might have been seven or eight when the technical happened. And I think we had just had a little small run with a basket or two. And I guess De Sousa and Thomas got their arms together, which happens, and Eli got his elbow up and grazed him or whatever and so it's a technical. Obviously that's a huge play because you're not only giving them two points and then the ball, but Eli now has a second foul.

"And it just -- it was just another example of how it felt like a mountain that we were climbing all day. And it was one of those things when nothing seems to be happening well for your team, that was just another in a long line in the first half."

After Kansas’ scorching start to the second half, the Tigers would put two or three good possessions together and pull within 15, but turnovers or missed shots would lead to a Kansas 3-pointer on the other end.

Clemson tried to make a rally at the seven-minute mark, getting a David Skara layup and a DeVoe 3-pointer from the corner that made it 68-55 with around six minutes to play. The Tigers held on the defensive end and DeVoe earned a good look at a corner three that would have made it a 10-point game, but the ball bounced out of the cylinder and Kansas kept the 13-point advantage.

Clemson refused to surrender, however. Aamir Sims hit a bucket and DeVoe hit two free throws to make it 72-61 with just over four minutes to play. The Jayhawks missed a long shot on the offensive end and Skara hit a layup that made it 72-63 at the three minute mark, the first time Clemson was within double digits since midway through the first half.

Clemson played stellar defense on the ensuing possession and Kansas was forced into a long shot at the shot clock buzzer, but Mitchell missed an ugly shot on the offensive end and Kansas hit a free throw after Reed fouled out on the rebound.

Notes: Clemson tied a program record for wins in a season (25) … they also broke a program record for ACC wins in a regular season with 11 … Clemson reached the Sweet 16 of the NCAA Tournament for the first time since 1997 … Gabe DeVoe is third all-time in scoring in the NCAA Tournament (75 points) … his average is first all-time with 25.0 points per game in three contests, third in points (75), fourth in field goals (28) and second in threes made (12) … he posted the 27th “Triple Leadership” in program history against Kansas – leading the team in points, rebounds and assists … DeVoe finishes his career 64 points shy of 1,000 (936) … his 31 points are the most by a Tiger in his final game since Larry Nance had 34 vs. Temple in a NIT game on March 12, 1981 … DeVoe is the first Clemson guard with at least 30 points and nine rebounds in the same game since Will Solomon had 43 and nine vs. Virginia on Jan. 15, 2000 … Donte Grantham’s 1,100 career points ranks 33rd all-time in Clemson history.

Clemson vs Kansas Box Score
Get the latest Clemson gear right here!
Comment on this story