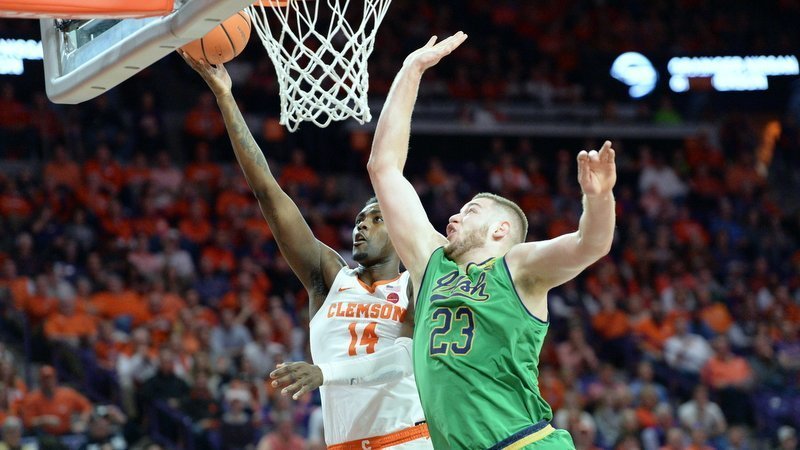 CLEMSON – At every turn, Brad Brownell and the Clemson basketball team have had to answer questions.

Would this finally be the year that Brownell could get the basketball program over the hump? After a good start in the conference, how will Clemson fare in the ACC? How will Clemson respond without Donte Grantham? Can Clemson rebound from the disastrous second half at Virginia?

With No. 20 Clemson’s 82-78 win over No. 19 North Carolina Tuesday night in Littlejohn, the Tigers improve to 18-4 overall and 7-3 in ACC play and seem to answer every question with flying colors, but Brownell said there’s still work to be done.

“It's great because this team just needs to keep winning games,” Brownell said after Tuesday’s big win over the Tar Heels. “As much as anything, it's that. I'm certainly glad to finally beat North Carolina and Notre Dame. I hadn't beaten those guys yet and you want to at least be them. We've been close several times. It's more about what this team is doing than it is any of that. That's secondary to your team feeling good about themselves, getting better, improving, competing hard. There's still a long road left and our team has a lot that we still have to deal with without our main guy and we're still trying to work through that.”

While the win over the Tar Heels was huge because it was the first win over North Carolina since 2010, Brownell said Sunday’s win in Atlanta over Georgia Tech may have been just as big because of the momentum it gave his team after a paltry 36-point performant at Virginia.

“A lot of people are making some things out of the Virginia game, but to be honest with you when we go back and watch the film, I told I our guys, 'Man, I was proud of the way you guys competed.' I thought we guarded Virginia for 30 minutes and we were in the game at Virginia for 30 minutes,” Brownell said. “Our offense was just not good and obviously some that - a lot of that - is Virginia, so they blew us out late. We weren't ready for that. Our guys hung in there and they weren't scared. A huge shot in the arm winning the game at Georgia Tech and giving us positive feedback, especially with this game being so close - a Sunday night game and then 48 hours later you're playing North Carolina. To have positive momentum and to feel good about ourselves really made us a little more focused and a little better prepared for a 7 o'clock tip on a school day.”

Three-point shooting was key in the victory as Clemson hit 15 triples – including its first seven made baskets of the game – and Brownell said sharp shooting from the outside is who this team can and will be as they hit the home stretch of the regular season.

“I think that's part of who we need to be. That's who we can be all the time in certain games because that's what is there. I think sometimes make too much out of that,” he said. “They forget that you have games like tonight where you make 15-out-of-30 and we'll probably have a game where we'll go 5-for-20 and we'll probably lose and then you'll be like, 'Well, they take too many threes.' Those threes won us the game against North Carolina and against Georgia Tech. There's a little bit of this that you got to be who you are sometimes. One of the things we can do is we can make shots. We also have to pound it inside and score and get to the free throw line and do different things.”

“It was huge. We've been playing pretty good ball at home all year, so we're just trying to continue to protect the house,” DeVoe said. “This is my first time beating North Carolina and being an in-state kid, it meant a little more to me.”

For Mitchell, any win over a Tobacco Road team is worth the wait.

However, there are more games to be played and DeVoe said the team chemistry and believe in each other will carry them through.

“We believe in each other. We believe in the guys in the locker room. We've been playing with confidence and every game we feel like we can win it and it shows,” DeVoe said.

Clemson travels to Wake Forest for a 2 p.m. tilt on Saturday and returns home next Thursday to face Pittsburgh at 7 p.m. before getting a much need week-long break.