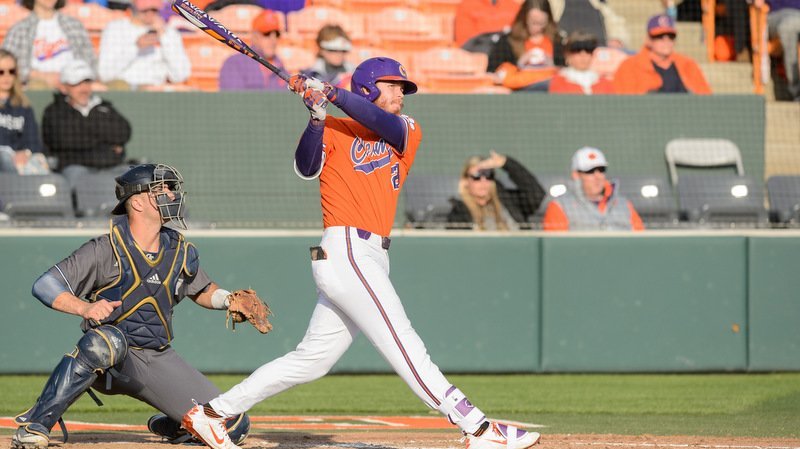 CLEMSON- Seth Beer has struggles, idols, and channels his inner kid, just like any normal guy.

Beer, a junior rightfielder for the Tigers has accounted for six home runs this season. He was named the ACC Player of the Week after leading Clemson to a 5-0 record last week, including a three-game sweep of Georgia Tech by hitting a home run in each of the three wins over the Yellow Jackets. Beer was 4-for-11 with three homers, four RBIs, five runs and a .500 on-base percentage in the series and totaled at least one run and one hit in each of the five games during the week. On the season, he is hitting .286 with 17 runs, two doubles, six homers, 12 RBIs, a .447 on-base percentage and a steal in 16 games.

After a solid hit and a home run into the Cajun Café by Beer in the series finale against Tech, the Yellow Jackets had had enough and intentionally walked Beer at his next at-bat. Beer’s response was what you could expect from a guy that wants to show his skills.

“For me, that was something I struggled with my sophomore year,” Beer told TigerNet after the game. “This year I promised myself I’d come in and just do whatever I can for the team to give us a chance at success; and if they are going to walk me and put me on, then I’m excited for Crommy (Patrick Cromwell) and Chris (Wiliams) to come up and put a good swing on the ball and maybe drive me in.”

Due to the rain early in the day, the fog rolled onto the field and became an issue for the Tigers towards the end of the second game of the day.

“Towards the end of the sixth, seventh, and eighth inning it was really bad”, Beer said. “It started to affect me personally hitting wise a little bit towards the eighth and ninth because it's just something no one had played in so it was difficult.”

The outfield was particularly foggy. Many spectators commented about the ghostly look of the outfielders in their white uniforms covered by the fog.

“Trying to see (Drew) Wharton in left field and I can’t even see him out there and you’re just kinda like okay well best of luck,” Beer said. “But we handled it well. Our outfield talked more towards the end of the game to try and handle that situation.”

Beer’s ability to produce big hits in times when they are desperately needed is just one of the things that makes him so valuable to the Clemson team.

With his hitting style, it is fitting that Chipper Jones would be who Beer looks up to in the baseball world. Beer recently switched back to a toe tap after previously using a leg kick when batting and says that is just one of the things he took from watching Jones.

“Chipper Jones is a guy that I grew up my whole life following and he toe-tapped his whole career and that’s why I have a high elbow and all that stuff and at the end of the day that’s what makes me, me and if I can get rhythm with my toe tap I think I’ll be in a good place and that’s why I switched back to it.”

Switching up a technique in the middle of a season can prove a challenge for most athletes, but according to Beer, “Every at-bat I feel a little bit better about it and it takes a little bit to adjust to everything because you work so hard on one craft and then when you change it mid-season it’s a little difficult; but I was really excited and happy to feel good about it.”

Over the off-season, Beer worked with major leaguer Charlie Blackmon of the Colorado Rockies.

“Some of the advice I would say he gave me was just go out and compete and have fun because no matter what level you are on it’s the same game. You play the same amount of innings, same number of outs, same amount of strikes and balls. It kinda opened my eyes to realize these guys don’t play the game any different than us, and just go out and enjoy it and play like a kid.”

This advice has proven helpful for Beer considering his important role in the Tigers 15-1 record overall and 3-0 record in the ACC.