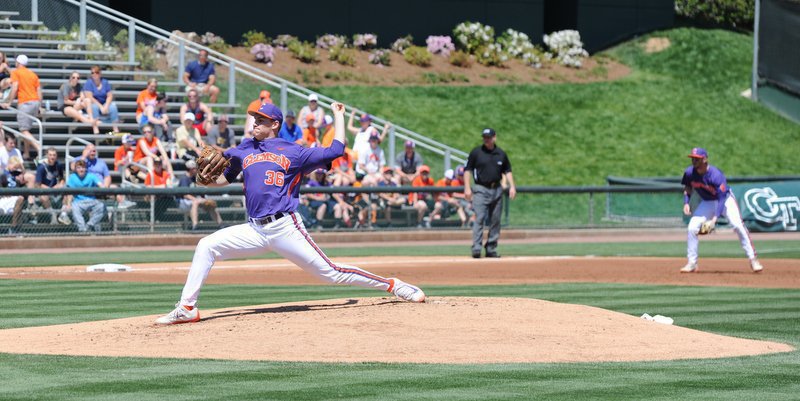 Rohlman had a career day, hitting two home runs and accounting for seven RBI as No. 5 Clemson defeated Georgia Tech 13-6 at Russ Chandler Stadium, giving the Tigers a series win in the rubber match game.

The Tigers improve 24-5 overall and 10-2 in the ACC, while Georgia Tech drops to 15-11 and 4-8 in the conference. Clemson will remain in first place in the ACC Atlantic.

Pat Krall, Clemson’s starting pitcher, earned his fifth win of the season giving up two runs on six hits and three walks and striking out six in 5 2/3 innings.

All five of Rohlman’s previous career home runs were solo shots. His seven RBI were the most by a Clemson player in a game since 2010. Chris Williams had a homer and a double and drove in three, while Logan Davidson homered and drove in three. Grayson Byrd continued to stay hot, going 3-for-3 with a walk and two runs scored.

"We hit out of our minds the first three innings of the game and go the momentum going with good at-bat after good at-bat after good at-bat. Reed Rohlman had a huge day for us," head coach Monte Lee said. "A number of guys hit the ball really well. Scored a bunch of runs early in the game. Would have liked to have seen us compete a little bit better, finish a little bit better. There were too many walks today on the mound, especially in the back half of the game. A couple of plays I felt like we should have made, but at the end of the day you win on Sundays in the rubber match on somebody else's field, that's always a good thing. We swung the bats well. The starting pitching was really good. I thought we played a solid game defensively and we've just got to keep getting better and better."

After back-to-back walks in the first to Rohlman and Seth Beer, Williams singled to left field, to plate the game’s first run. Davidson doubled, scoring Beer from third, and Davidson scored on a sac fly by Andrew Cox that gave Clemson an early 3-0 lead.

Georgia Tech would get one run back in the bottom of the first after a leadoff double by Trevor Craport, who advanced to third on a bunt and scored on a groundout to the shortstop, cutting Clemson’s lead to 3-1.

The Tigers broke the game open with a seven-run second inning.

That brought up Rohlman, who promptly drilled a 2-1 pitch over the right centerfield wall for his first career grand slam and his first home run this season. Beer followed with a double to left-center and Williams got into the act when he homered to left for his seventh long ball of the season. Next up was Davidson, who launched his fourth homer of the season over the wall in left, giving Clemson a 10-1 lead in the second.

Rohlman’s career day continued in the third, with a three-run bomb to almost the exact same spot as the grand slam, extending Clemson’s lead to 13-1.

Wade Bailey doubled down the right field line and scored on a single by Kel Johnson, making it a 13-2 Clemson lead. The Jackets added four runs in the bottom of the eighth to account for the final score.

Lee said he was pleased to see so many orange-clad fans in the stands.

"I thought it was unbelievable. I felt like we had just as many fans, if not more," he said. "There was a whole bunch of purple and orange in the stands today. Little kids coming up and wanting us to sign autographs. It's always cool to have a good following on the road. This area and the state of Georgia and the Atlanta area is a big area for us in recruiting. We've had a bunch of kids come from the state of Georgia and play for us at Clemson, so it's always great to get that kind of support. We really appreciated it."

Clemson travels to Athens to take on the Georgia Bulldogs Tuesday night at 7 p.m. The Tigers will host Virginia Tech in a three-game series next weekend.

Clemson vs. GT game three box
ONE DAY ONLY! Fanatics.com Black Friday Sale 20% off on orders over $75
Comment on this story