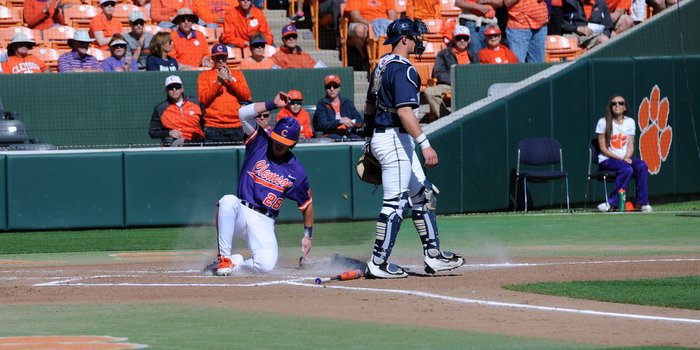 CLEMSON – Thirteen turned out to be unlucky.

Clemson’s 13-game home winning streak came to an end in desultory fashion Saturday as Pitt roughed up Clemson pitching for 15 runs and 18 hits in a 15-5 win over the 17th-ranked Tigers at Doug Kingsmore Stadium.

The winning streak had been the longest since the Tigers won 18 in a row at home back in 2010, but the Panthers scored early and often in breaking the streak.

It didn’t take long for Pitt to get on the scoreboard as leadoff man Jacob Wright doubled through the left side and scored a two-run bomb by Alex Kowalczyk, giving the Panthers a 2-0 lead in the first inning.

However, Clemson would answer in the bottom half of the inning. Chase Pinder led off the inning with a single up the middle and advanced to second on a grounder by Eli White. Chris Okey laced a single to right field to plate Pinder. Seth Beer rocketed a single to left on the first pitch of his at bat to put runners on for Reed Rohlman, who doubled off the left field wall to clear the bases and give Clemson as 3-2 lead after one inning.

The single for Beer extended his hitting streak to 23 games. 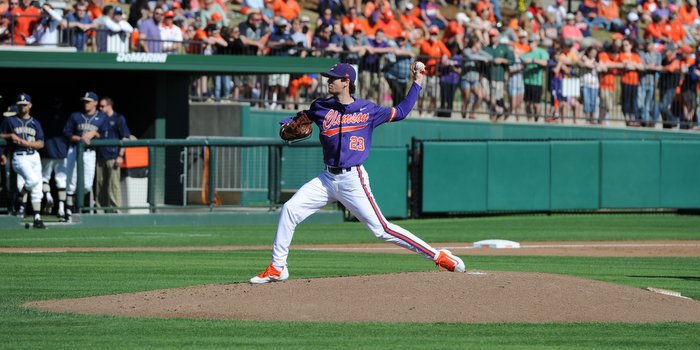 Barnes got two quick outs in the second, but Pittsburgh used three singles and a hit batsman to score three runs. Johnson hit a 3-2 pitch to left center and advanced to second when Wright was hit by a pitch. LeBlanc followed that up with an RBI single to left and took second when Jordan Greene couldn’t corral the ball. Kowalczyk added two more RBI on a single down the right field line that gave Pittsburgh a 5-3 lead after two innings.

Clemson got one run back in the bottom of the third as freshman sensation Seth Beer launched his 12th home run of the season to straightaway center to cut Pittsburgh’s lead to 5-4. Beer's 12 home runs equal the 12 hit by Okey last season when he led the team. Kyle Parker had 20 in 2010, Richie Shaffer had 13 in 2011, Shaffer had 10 in 2012, Garrett Boulware had eight in 2013 and Steve Wilkerson led the team with just six in 2014.

The Tigers had two on with one out in the bottom of the fourth but a double steal forced Reed Rohlman out at third, leaving Robert Jolly at second base with two outs. Greene – starting his fourth consecutive game at third base – hit a 3-2 pitch back up the middle giving Jolly just enough time to score and tying the ballgame at 5-5.

Clemson starter Charlie Barnes exited the game with bases loaded and nobody out in the fifth. Barnes gave up eight runs on 10 hits, two hit batsmen and a walk, while striking out five in four innings.

Brooks Crawford entered the game and struck out the first batter he faced and got a fly ball out for the second inning that allowed Frank Maldonado to score for third. Charles LeBlanc singled to center to score two more runs in the fifth inning, giving Pitt a 8-5 lead over Clemson.

A single and two walks loaded the bases for Pittsburgh in the sixth before Matt Johnson hit a bloop single to center that scored Yanni and Parri to give Pittsburgh a 10-5 lead and end Crawford’s day on the mound.

Alex Schnell entered the game and gave up a walk and a two-run single to extend the Panthers’ lead to 12-5.